Trump defends handling of coronavirus outbreak in US

'Everything we did was right,' says president 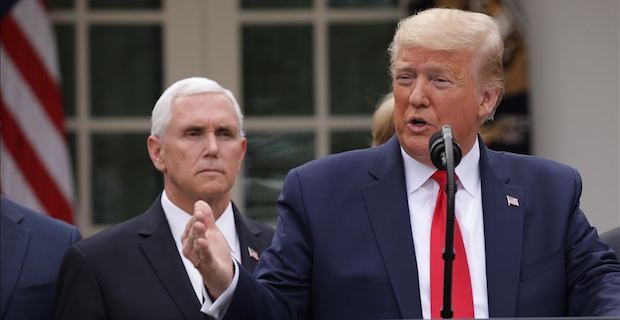 U.S. President Donald Trump lashed out Monday at weeks of criticism over his handling of the novel coronavirus outbreak in the country.  Speaking at a White House coronavirus task force briefing, Trump said the Centers for Disease Control and Prevention (CDC) issued a travel notice on Jan. 6 for Wuhan, the Chinese city where the virus originated last December, due to its spread.  He recalled that the CDC also issued a Level I travel health notice on Jan. 11 and there was not a single confirmed case then.  "People wanted me to act. I am supposed to close down the greatest economy?" he said.

Trump said that on Jan. 17, the CDC began implementing public health entry screenings at three major airports that received a great volume of passengers from Wuhan at his instruction.  "You remember what happened, when I did act. I was criticized by [House Speaker] Nancy Pelosi, Sleepy Joe. In fact, I was called xenophobic," he said, referring to presidential candidate Joe Biden.  The first case of COVID-19 in the U.S. was reported on Jan. 21 and the CDC activated an operation center in response to the outbreak. The first death occurred on Feb. 29 in Washington state.

"On Jan. 31, I issued a travel restriction on China. Nobody died and I issued. You cannot get earlier than that," he said. "I got brutalized over it by the press because I was way too early." On March 11, Trump announced a ban on travelers to the U.S. from Europe during a televised address to the nation as part of measures to stem the spread of the virus. Trump has long been criticized by Democrats and several media outlets for his "poor" handling of the outbreak, with some citizens claiming the president has the blood of the people who died from the virus on his hands.

"Everything we did was right," he added.  As of Monday evening, more than 23,600 people in the U.S. have died from the novel coronavirus and more than 581,000 have been infected, according to data from Johns Hopkins University.  The U.S. is the country with the highest number of cases and deaths worldwide.  The virus has spread to 185 countries, infecting  nearly 2 million people since first emerging in Wuhan, China late last year. The global death toll is nearly 120,000, while about 450,000 people have recovered.

Keywords:
TrumpCoronavirus
Your comment has been forwarded to the administrator for approval.×
Warning! Will constitute a criminal offense, illegal, threatening, offensive, insulting and swearing, derogatory, defamatory, vulgar, pornographic, indecent, personality rights, damaging or similar nature in the nature of all kinds of financial content, legal, criminal and administrative responsibility for the content of the sender member / members are belong.
Related News