The relations between the UK and Russia are about to plunge into a new low over mutual threats of legislated sanctions amid one of the highest tensions in Europe since the World War II over Ukraine. 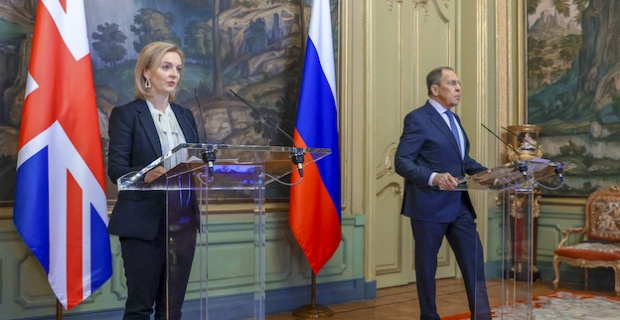 Ahmet Gurhan Kartal   | 17.02.2022 -LONDON/ANALYSIS- UK, Russia relations hit 'lowest point' over Ukraine. London threatens Russians with sanctions in case of Ukraine invasion, Moscow says it would retaliate.The relations between the UK and Russia are about to plunge into a new low over mutual threats of legislated sanctions amid one of the highest tensions in Europe since the World War II over Ukraine.Spearheading a movement to form a Western coalition of anti-Moscow actions, including financial sanctions over organizations and individuals whom they deem close to President Vladimir Putin's regime, Britain has repeatedly warned Kremlin of heavy consequences if Russia prefers an incursion into Ukraine.The new legislation will give British ministers a power to quickly impose new sanctions on Russian oligarchs and businesses. Britain's Foreign, Commonwealth and Development Office said the new law would be used to sanction a wide range of organizations and individuals critically and strategically significant to the Russian government.

"What we're doing is targeting particular Russian banks, Russian companies, and making sure that we take steps, take even more steps, to unseal the facade of Russian property holdings ... whether in London or elsewhere," Johnson said.

"Unpeel the facade of Russian ownership of companies. And also take steps to take Russian companies from raising capital on London financial markets."

However, Russian Foreign Minister Sergey Lavrov vowed to retaliate against such a move by London.He urged the Russian parliament to draft a bill analogous to the British legislation in question which would allow for an array of tough sanctions against Moscow.Taking a critical tone, Lavrov slammed the British government's anti-Russian steps: "London is used to and likes to play the role of a provocateur in relations between Russia and the West."He warned: "If this law will completely come into force, I have no doubts that our parliament will have all grounds, and it will be even necessary to adopt an analogous law."

The already sour relations between the two countries did not change course but only got worse after British Foreign Secretary Liz Truss paid a visit to Moscow last week.Ridiculed by Lavrov, the British delegation was accused of travelling to Russia without doing their homework.

Lavrov said the talks with Truss was "a talk of a mute with a deaf."

He said they did not talk about bilateral relations, which are "at the lowest point" as Lavrov described, since Truss particularly wanted to discuss the situation in Ukraine, the Russian-Belarusian joint military drill, the restoration of the Iran nuclear deal, and Russia's cooperation with China.

The Russian-British relations were at the lowest point after the alleged poisoning of a former Russian agent and his daughter in Salisbury, England in March 2018.Sergei Skripal and his daughter Yulia British were treated for weeks in hospital after they were allegedly poisoned with military grade nerve gas called Novichok.Skripal was given refuge in the UK after a 2010 spy exchange between the US and Russia.British authorities said Dawn Sturgess, a 44-year-old British national, died after she handled an item contaminated with the same nerve agent in Amesbury.After weeks of investigation, Brits concluded that it was a brazen attack by Anatoliy Chepiga and Alexander Yevgenyevich Mishkin, two agents of Russia's main intelligence directorate, the GRU, who travelled to Salisbury under fake identities.Furious with the fact that British citizens were subjected to the alleged attack on its own soil by a foreign power, Britain prompted the expulsion of more than 150 Russian diplomats from various Western countries.

Denying any involvement in the incident, Russians protested the expulsions and responded similarly by expelling many Western diplomats, including 73 Brits.

In 2020, Alexei Navalny – an opposition figure in Russia – was allegedly poisoned by the same nerve agent, which Brits say Russian agents used in Salisbury, on a flight from Tomsk, Siberia, to Moscow on Aug. 20.He was later transferred to a hospital in Germany and discharged after 32 days.The UK was one of the first to accuse Kremlin for the alleged poisoning. The British Foreign Office sanctioned seven Russian Federal Security Service members a year after the incident, saying that they targeted, together with the US, those "directly responsible for planning or carrying out the attack."In December 2021, Russia imposed a travel ban on seven British citizens, whose identities were not released, in a tit-for-tat response, saying they were "closely involved in anti-Russian activities."

In any eventuality, Kremlin is always ready to respond in kind.Days ago, and after a ban by German authorities on Russian broadcaster RT Deutsch in the country, Moscow quickly took a counter action and banned German Deutshce Welle in Russia.In 2019, Moscow threatened to ban BBC in Russia after the UK media watchdog OFCOM released a report criticizing RT for biased reporting on the Salisbury poisoning.A lot hangs in balance today as Russians say they are withdrawing military units from various locations but the West says they have not got yet enough evidence that an incursion will not take place.In the case of an incursion into Ukraine by Russia, mutual sanctions and bans, as well as an obvious plunge in the $16 billion a year trade between the UK and Russia are almost in the foreseeable future.So, the consequences of such an incursion would be damaging for the UK in the post-Brexit era as much as it would be for Russia.

Keywords:
London Threatens RussiansUkraine InvasionUK And RussiaEuropeWorld War II Over Ukraine.
Your comment has been forwarded to the administrator for approval.×
Warning! Will constitute a criminal offense, illegal, threatening, offensive, insulting and swearing, derogatory, defamatory, vulgar, pornographic, indecent, personality rights, damaging or similar nature in the nature of all kinds of financial content, legal, criminal and administrative responsibility for the content of the sender member / members are belong.
Related News