There is no common ground with Greek Cypriot Administration, President Ersin Tatar stated 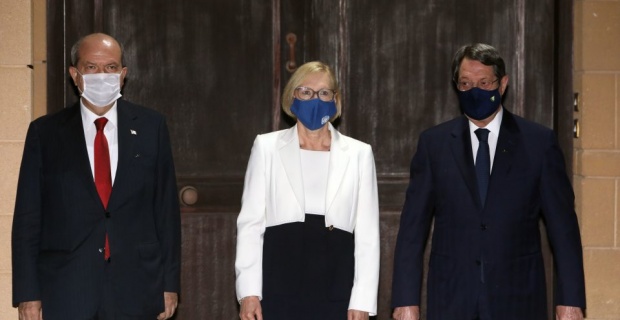 Turkihs Republic of the Northern Cyprus President Ersin Tatar stated that it was seen at the trilateral meeting held yesterday (27th September) with the United Nations (UN) Secretary-General Antonio Guterres and the Greek Cypriot Administration Leader Nikos Anastasiades that there is no common ground for starting official negotiations, but that both sides agreed to strengthen the cooperation and technical committees for the improvement of life in Cyprus.Following the tripartite luncheon meeting in New York, President Ersin Tatar held a press conference at Turkish House and made evaluations.Tatar said: “We reiterated our proposal based on sovereign equality, which envisages two states to live side by side. We have conveyed that the 6-point proposal we put forward in Geneva is valid and that we will not step back from it, adding that “if our proposals are accepted, official negotiations can begin.”

Indicating that the Greek Cypriot leader Nikos Anastasiades did not accept this and we are faced with a mentality that does not accept our right to separate sovereignty, Tatar emphasised that there is no common ground at the moment.

Tatar also said that both the Greek Cypriot side and the Turkish Cypriot side expressed their readiness to make cooperation steps to improve life in Cyprus and to strengthen the 12 technical committees and the Secretary-General welcomed this issue.

Noting that he was pleased with the objective stance of Secretary-General Guterres during the meeting, Tatar said: "Even though such talks do not yield results, they are good for dialogue".

President Tatar noted that UN Secretary-General Guterres intends to appoint a new personal representative to replace Jane Holl Lute, the name has not yet been confirmed, but following this person conducting a common ground survey, it will be decided whether to hold a new informal summit.

Keywords:
Greek Cypriot AdministrationGreek CypriotPresident Ersin TatarTurkihs Republic Of The Northern Cyprus
Your comment has been forwarded to the administrator for approval.×
Warning! Will constitute a criminal offense, illegal, threatening, offensive, insulting and swearing, derogatory, defamatory, vulgar, pornographic, indecent, personality rights, damaging or similar nature in the nature of all kinds of financial content, legal, criminal and administrative responsibility for the content of the sender member / members are belong.
Related News