The victims of right-wing extremism and survivors of ethnic cleansing deserve better. Time to end the punishment of Turkish Cypriots

Having served in Cyprus as a young Royal Air Force officer on his way up to the pinnacle of the RAF, Sir Michael knows the island and Greek and Turkish Cypriots well. 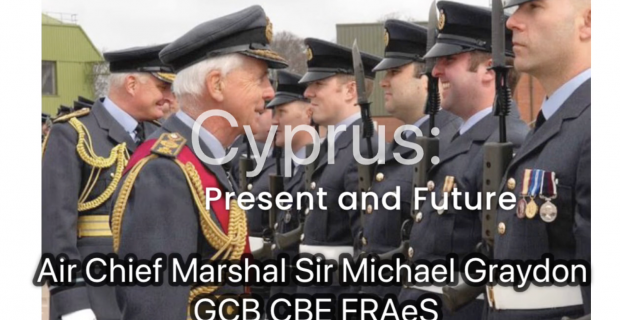 AVRUPA NEWS AGENCY (AVA)  AVRUPA NEWSPAPER/LONDON-The victims of right-wing extremism and survivors of ethnic cleansing deserve better. Time to end the punishment of Turkish CypriotsA truly remarkable discussion between Air Chief Marshal Sir Michael Graydon, GCB CBE FRAES and Fahri Zihni, chair of Embargoed, went out on YouTube today. Please see https://youtu.be/hpKaQL4WcG0 Having served in Cyprus as a young Royal Air Force officer on his way up to the pinnacle of the RAF, Sir Michael knows the island and Greek and Turkish Cypriots well. He has also remained in close touch with the British ex-patriate community of North Cyprus. Indeed, the Kyrenia branch of the Royal British Legion owes a great deal to Sir Michael’s drive and commitment.It was Sir Michael who was much involved in efforts for a memorial to the 371 young servicemen and a further 72 other servants of the crown (including Greek and Turkish Cypriots) killed by

EOKA, the right-wing terrorist organisation led by General Grivas of Greece and backed by Athens, who demanded ‘Enosis’ (union with Greece). Their murderous campaign against the

British was a prominent feature of life on the island in the five years before independence in 1960.

Sir Michael is of the view that continued demands for the “nonsense of Enosis” after independence, right up to Turkey’s intervention in 1974, poisoned the atmosphere and severely affected any prospect of Greeks and Turks living together on the island again.
The former head of the Royal Air Force does not mince his words in the exchanges with Mr Zihni. He lambasts the European Union (EU) for allowing Cyprus to join the EU without a solution to the Cyprus problem, and doing so without the Turkish Cypriots. Sir Michael’s view is that once Brussels made it clear that Cyprus would be accepted for membership, irrespective of the outcome of the referendums in North and South Cyprus, any leverage the international community, and in particular the EU may have had on the Greek Cypriots to compromise was lost. To their credit the Turkish Cypriots voted heavily in favour of the UN (Annan) Plan in 2004 while Greek Cypriots rejected it. This rejection was hardly a surprise given that in joining the EU without Turkish Cypriots they had achieved so much of what they wanted without having to make compromises to the Turkish Cypriots. He terms this a “big mistake” and sees the ensuing EU sanctions on Turkish Cypriots as disproportionate and unjust punishment.

Sir Michael concludes that Turkish Cypriots, “who have endured attempts at ethnic cleansing by Greek Cypriot factions deserve better from the international community, including consideration of an independent state.” Without Turkey’s action in 1974, “There would not be any Turkish Cypriots left in Cyprus.” “Enough is enough, denial of human rights for people who meet all the requirements of democratic statehood and who were the victims of ethnic cleansing for decades, who voted for the UN solution to the Cyprus problem, only to have sanctions imposed on them for some 37 years, is a disgrace, and it is time to end it”.
In promoting the issue of a separate Turkish Cypriot state, Sir Michael echoes former Foreign Secretary Jack Straw’s proposal for an independent Turkish Cypriot republic as the only equable and just way of resolving the Cyprus conundrum.

Sir Michael Graydon GCB CBE FRAES served as a UK Royal Air Force pilot and staff officer, including command appointments in the UK and Falkland Islands; He was a NATO Commander in 1991-2 and Head of the Royal Air Force from 1992-97. He was knighted in 1989 and has had a second home in Cyprus for more than half a century.

Fahri Zihni is the Chairman of Embargoed.org, an independent human rights group which campaigns against embargoes placed on the people of North Cyprus.

Embargoed! is an independent human rights group campaigning for the end to all embargoes against North Cyprus.The group was formed in September 2004 and aims to play an active role in raising awareness about the isolation of  North Cyprus, lobbying world leaders and institutions to restore the fundamental political, economic and social rights  of Turkish Cypriots.

Keywords:
Ethnic CleansingExtremismGreekTurkishTurkish CypriotsCypriotsRoyal Air Force OfficerEOKAGeneral Grivas Of GreeceEnosis
Your comment has been forwarded to the administrator for approval.×
Warning! Will constitute a criminal offense, illegal, threatening, offensive, insulting and swearing, derogatory, defamatory, vulgar, pornographic, indecent, personality rights, damaging or similar nature in the nature of all kinds of financial content, legal, criminal and administrative responsibility for the content of the sender member / members are belong.
Related News