A hotel in Tenerife in Spain's Canary Islands has been locked down after a visiting Italian doctor tested positive for coronavirus. 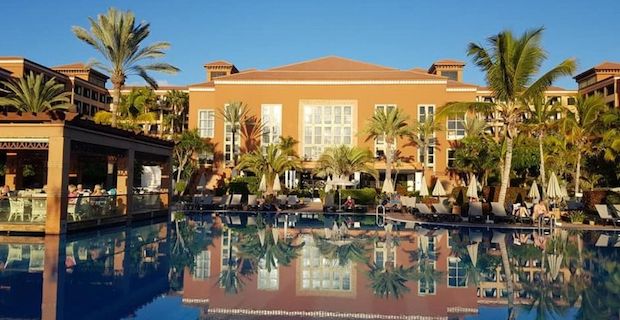 Hundreds of guests at the H10 Costa Adeje Palace Hotel were initially told to stay in their rooms as medical tests were carried out, Spanish media report. The doctor is reportedly from the Lombardy region, where Italian authorities are battling an outbreak.

Global cases of the virus have passed 80,000, the vast majority in China.

The coronavirus outbreak has continued to hit shares, with Japan's markets slumping in the wake of big falls in London and New York.

The World Health Organization (WHO) said on Monday the world should do more to prepare for a possible pandemic - a situation where an infectious disease spreads easily between people in many countries.

The proportion of infected people who die appears to be between 1% and 2%, although the WHO cautions that the precise mortality rate is not known yet.

What's the latest from the hotel in Tenerife?

El Pais newspaper quoted police sources as saying health authorities had ordered the monitoring of guests at the four-star hotel in the south-west of the island.

One guest on Facebook posted an image of a note put under the door of their room on Tuesday saying: "We regret to inform you that for health reasons, the hotel has been closed down. Until the sanitary authorities warn, you must remain in your rooms."

One guest later told the BBC that people were now being allowed to move around the hotel.

Another guest, Christopher Betts, told Reuters news agency: "We can see from the window there are security officers outside the hotel and about 50 hotel employees."

He said the guests had been given no information and he had not yet been tested.

The doctor, who had been staying at the hotel with his wife, tested positive on Monday and has been placed in isolation at the University Hospital Nuestra Señora de Candelaria. He will undergo a second test to confirm the virus.

Italy has the largest number of cases in Europe, 231, and announced a series of drastic measures over the weekend to try to contain the outbreak.

In the regions of Lombardy and Veneto, a lockdown is in place in several small towns. For the next two weeks, 50,000 residents will not be able to leave without special permission.

A number of top-flight football matches will be played in empty stadiums next weekend.

Keywords:
HotelCoronavirusTenerife
Your comment has been forwarded to the administrator for approval.×
Warning! Will constitute a criminal offense, illegal, threatening, offensive, insulting and swearing, derogatory, defamatory, vulgar, pornographic, indecent, personality rights, damaging or similar nature in the nature of all kinds of financial content, legal, criminal and administrative responsibility for the content of the sender member / members are belong.
Related News