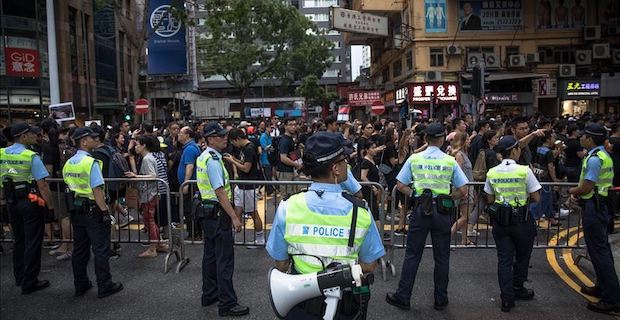 Taiwan on Monday called for holding “democratic” elections in Hong Kong. “It’s sad to see the rule of law eroding & the divide between the people & the government widening in #HongKong. The way forward is genuine democratic elections, not violence in the streets & #MTR stations. The freedom & #HumanRights of the people must be protected! JW,” Joseph Wu, Taiwan’s foreign minister, said in a Twitter post. The statement by Wu came few days after Taiwan President Tsai Ing-wen said that “friends from Hong Kong will be treated appropriately and on humanitarian grounds”.

She was apparently referring to fleeing Hong Kong protesters who have reportedly sought refuge in Taiwan fearing persecution back home.

Hong Kong and Macao are autonomous regions under Chinese rule, while Taiwan is what China calls a breakaway province.

Hong Kong has been witnessing massive anti-government protests since early June after the local government led by Lam Carrie for proposed changes to region’s extradition law.

However, rights groups protested the move and called for resistance fearing that the new law will legalize extradition of even suspects to mainland China, Taiwan and Macao.

The Sunday protests triggered condemnation from China which said that its liaison office in Hong Kong was “attacked”.

“I’m confident the rioters who pelted the liaison office building in Sai Ying Pun with eggs and paintballs would be punished by local authorities,” he added.

Hong Kong currently has extradition agreements with 20 countries including U.S. and New Zealand.

Under fire from people, Lam declared the amendment bill “dead” and postponed its reading for indefinite time.

Lam was “elected” to office of chief executive in 2016 and is seen as toeing China's line by a vast majority of its 7 million population. Her term will end in 2020.

The Legislative Council of Hong Kong has 70 members, half of whom are elected while rest are nominated to the legislature.

Keywords:
Hong KongElections In Hong Kong
Your comment has been forwarded to the administrator for approval.×
Warning! Will constitute a criminal offense, illegal, threatening, offensive, insulting and swearing, derogatory, defamatory, vulgar, pornographic, indecent, personality rights, damaging or similar nature in the nature of all kinds of financial content, legal, criminal and administrative responsibility for the content of the sender member / members are belong.
Related News