weather service warned residents of areas threatened by the storm "you are in a life-threatening situation .... take cover now." 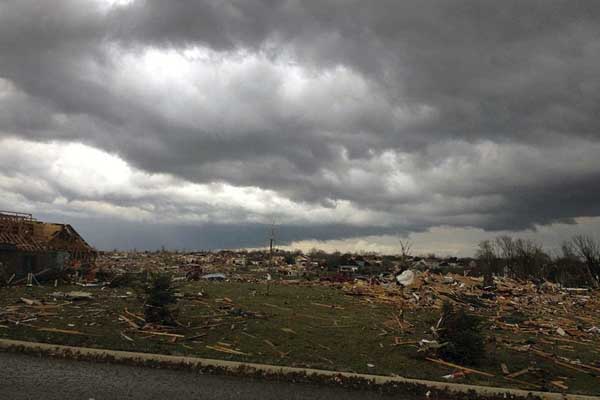 The storm also forced the Chicago Bears to halt their game against the Baltimore Ravens and the NFL fans at Soldier Field to seek shelter as menacing clouds rolled in. Chicago's two major airports briefly stopped traffic while the metropolitan area was under a tornado watch.

A small farmhouse there took a direct hit, according to the NWS survey team report. "The homestead was totally destroyed with only the foundation remaining," the NWS report said.

A total of 80 tornado reports were received along with 358 reports of damaging winds and 40 reports of large hail, according to Rich Thompson, a lead forecaster with the weather service's Storm Prediction Center in Norman, Oklahoma.

The storm moved dangerously fast, tracking eastward at 60 miles per hour (97 kph) and Thompson said the bulk of the tornado damage from the storm occurred over a period of about five hours.

"We'll still have a wind damage threat across Pennsylvania and New York into the overnight hours," Thompson said late on Sunday.

Sunday night, along with about 100,000 Michigan residents, due to storm-related outages, according to utility providers.

About 50,000 outages were also reported in Indiana and some 3,000 people were without power in Kentucky.