South Africans are demanding return of Great Star of Africa

The diamond was taken from South Africa in 1905 and was “gifted” to King Edward VII by the government of the British Transvaal Colony. 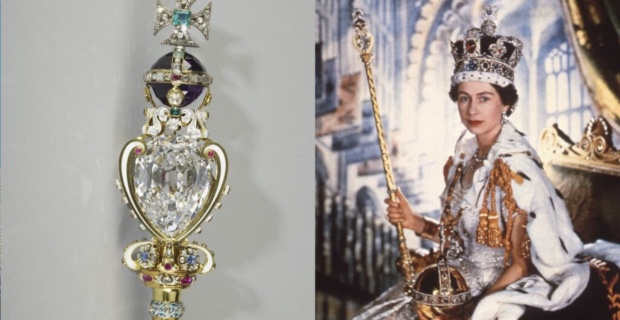 Calls have grown in South Africa following the death of Britain’s Queen Elizabeth II for the return of a stunning gem “stolen” from the country.South Africans are demanding the return of the Great Star of Africa, which is kept with other jewels in the Tower of London. They claim that the gem -- the world’s largest cut colorless diamond, which is mounted on a royal scepter that belongs to the Queen -- is a cultural artifact that was seized by British colonial troops at the time and transferred to London.  However, the diamond and its scepter are among the most priceless items in the British Royal Treasury. With its size and technical precision, the Great Star of Africa, also known as the Cullinan Diamond, is one of the few of its kind.  The pear-shaped gemstone, which weighs about 26.5 grams and has 74 facets and remarkable clarity, is thought to have a market value of at least $400 million. The diamond was taken from South Africa in 1905 and was “gifted” to King Edward VII by the government of the British Transvaal Colony. More than 7,000 people have signed a petition for the return of the diamond, according to Change.org.  Many South Africans recently expressed this demand on social media.

Keywords:
UKSouth AfricaQueen Elizabeth IIDiamondGreat Star Of AfricaLondon
Your comment has been forwarded to the administrator for approval.×
Warning! Will constitute a criminal offense, illegal, threatening, offensive, insulting and swearing, derogatory, defamatory, vulgar, pornographic, indecent, personality rights, damaging or similar nature in the nature of all kinds of financial content, legal, criminal and administrative responsibility for the content of the sender member / members are belong.
Related News