Second explosion in Bangkok after the attack at a popular shrine

The explosion in Bangkok on the Taksin Bridge 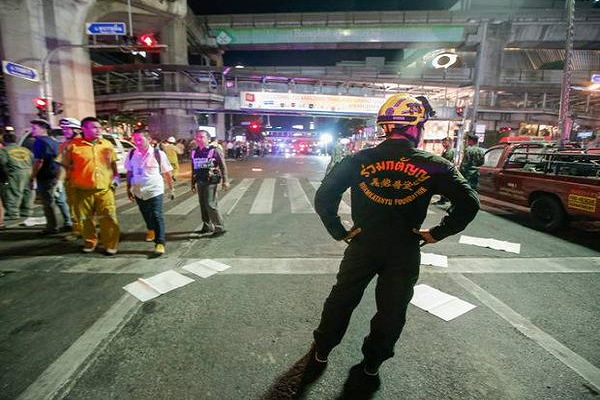 A small explosive device has been thrown from a bridge in Bangkok, a day after a bomb at a popular shrine in the Thai capital killed 22 people and injured 123. Police said a device appears to have been thrown towards a pier from the Taksin bridge. Security camera footage shows people on a walkway at the Sathorn pier being doused with water after the object fell into the Chao Phraya river. No link has been made to Monday’s attack and no one was hurt. “If it did not fall in the water then it certainly would have caused injuries,” a deputy police chief told Reuters. Thailand’s defence minister has said authorities are close to determining who detonated Monday’s bomb. China fears its tourists were target for Bangkok bombers. “It is much clearer who the bombers are, but I can’t reveal right now,” Prawit Wongsuwan said on Tuesday. “We have suspects. There are not many people.” (http://www.theguardian.com)