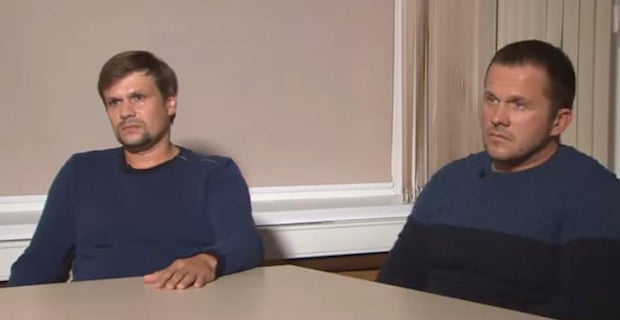 Alexander Petrov and Ruslan Boshirov, the two Russian nationals who were named as the suspects of the Salisbury never agent attack, appeared on the Russian state TV on Thursday.

In an interview with Russia Today's editor-in-chief Margarita Simonyan, the two men confirmed that they were the people identified by the U.K. investigators.

The duo said they have been in Salisbury as tourists to the city's cathedral.

"Our friends had been suggesting for a long time that we visit this wonderful town,” the man identified as Alexander Petrov said.

"Salisbury is a touristic city. There’s the famous Salisbury Cathedral, famous not just in Europe, but in the whole world. It’s famous for its 123-meter spire, it’s famous for its clock, the first one [of its kind] ever created in the world, which is still working," Petrov said.

The men said they also wanted to visit Stonehenge and Old Sarum, "but we couldn’t do it because there was muddy slush everywhere," Petrov added.

"We spent no more than an hour in Salisbury, mainly because of the lags between trains. Maybe we did [approach] Skripal's house, but we don't know where it is located," Boshirov.

Petrov and Boshirov also denied bringing the nerve agent in a perfume bottle, saying it would look suspicious for a man to carry a women's perfume in his luggage during the customs check.

"When your life turned upside down, you don't know what to do and where to go. We're afraid of going out, we fear for ourselves, our lives and lives of our loved ones", Boshirov said.

The Crown Prosecution Service (CPS) has said Petrov and Boshirov are wanted for conspiracy to murder Sergei Skripal and the attempted murder of Yulia Skripal and police officer Nick Bailey.

Sergei Skripal and his daughter were admitted to a hospital after being found unconscious on March 4 in Salisbury. They were both since discharged from the hospital.

Police officer Nick Bailey, who was among the first to respond to the incident, also received treatment after being poisoned. Skripal was granted refuge in the U.K. following a 2010 spy exchange between the U.S. and Russia. Before the exchange, he had been serving a 13-year prison term for leaking information to the British intelligence.

Keywords:
Salisbury PoisoningSergei Skripal
Your comment has been forwarded to the administrator for approval.×
Warning! Will constitute a criminal offense, illegal, threatening, offensive, insulting and swearing, derogatory, defamatory, vulgar, pornographic, indecent, personality rights, damaging or similar nature in the nature of all kinds of financial content, legal, criminal and administrative responsibility for the content of the sender member / members are belong.
Related News