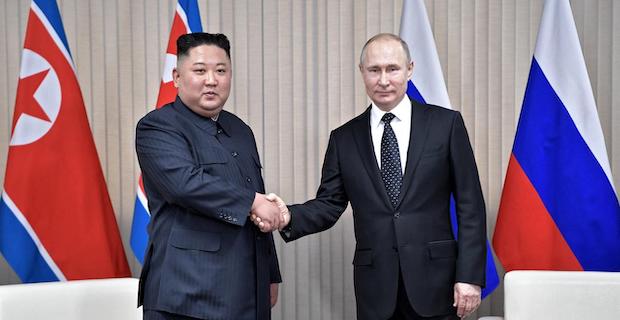 Russian President Vladimir Putin had "a substantive conversation" with North Korean chairman Kim Jong Un ahead of the talks, the Kremlin said Thursday. Greeting Kim Jong Un on Russky Island in the port city of Vladivostok, Putin recalled that Russia and North Korea marked the 70th anniversary of diplomatic relations in 2018. Putin said he is expected to discuss the settlement on the Korean Peninsula at the meeting as well as the development of the trade relations between the two countries.

"We welcome your efforts to develop inter-Korean dialogue and to normalize North Korean-U.S. relations," Putin said.

The two leaders also congratulated each other with re-election.

This is the first visit of North Korean leader to Russia since 2011. It is also the first meeting of Putin and Kim.

Keywords:
Russian President Vladimir PutinKim Jong UnVladivostok
Your comment has been forwarded to the administrator for approval.×
Warning! Will constitute a criminal offense, illegal, threatening, offensive, insulting and swearing, derogatory, defamatory, vulgar, pornographic, indecent, personality rights, damaging or similar nature in the nature of all kinds of financial content, legal, criminal and administrative responsibility for the content of the sender member / members are belong.
Related News