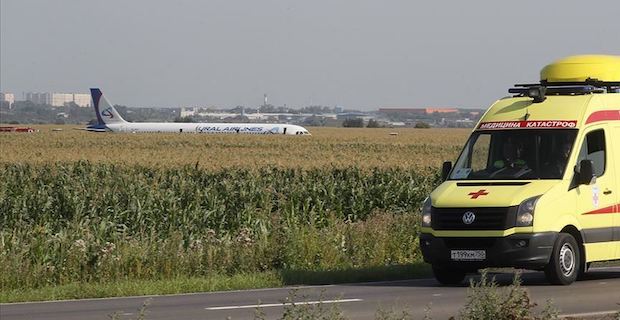 A commercial airliner made an emergency landing near the Russian capital on Thursday, injuring 55 passengers including 17 children.

Ural Airlines flight A321 was headed from Moscow to Simferopol with 230 passengers on board when one of its engines was engulfed in flames while in the air, the Emergency Situations Ministry said in a statement.

Managing to prevent the fire from spreading to the rest of the aircraft, the crew requested an emergency landing at Zhukovsky Airport, but undershot the landing strip by about one kilometer (0.6 miles).

The burning engine detached from the aircraft after it reached the ground.

Emergency teams including two helicopters were deployed to the site.

Most passengers took minor injuries, though only six were hospitalized, five of them children.

According to Ural Airlines director Sergey Skuratov, both engines failed after several birds flew in them.

A criminal inquiry was opened in the case following the incident.

Keywords:
Ural AirlinesEmergency Airline Landing
Your comment has been forwarded to the administrator for approval.×
Warning! Will constitute a criminal offense, illegal, threatening, offensive, insulting and swearing, derogatory, defamatory, vulgar, pornographic, indecent, personality rights, damaging or similar nature in the nature of all kinds of financial content, legal, criminal and administrative responsibility for the content of the sender member / members are belong.
Related News