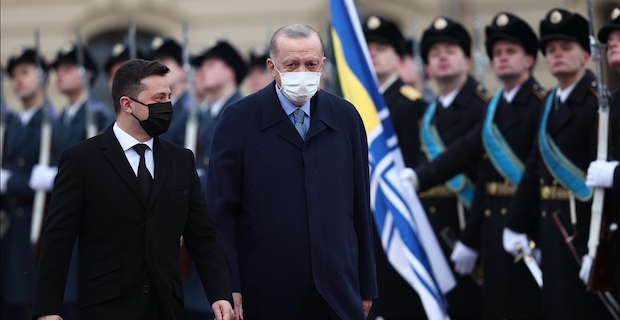 Turkiye's President Recep Tayyip Erdogan arrived in Ukraine on Thursday for an official visit. Erdogan was welcomed at Boryspil Airport in the capital Kyiv by Turkiye's Ambassador Yagmur Ahmet Guldere, Ukraine's Ambassador in Ankara Vasil Bodnar, as well as officials from the Ukrainian Foreign Ministry.

As part of his visit, which comes at the invitation of Ukrainian President Volodymyr Zelensky, the Turkish leader will meet his counterpart for a one-on-one meeting after an official welcoming ceremony at the Mariinsky Palace in Kyiv.

Later, Erdogan is expected to attend the 10th meeting of the High-Level Strategic Council between Turkiye and Ukraine.

Following the meeting, Erdogan and Zelensky are expected to sign various agreements and address a joint news conference in the capital city.

On Wednesday, Turkiye's Communications Directorate said in a statement that Erdogan and Zelensky will review the two countries' relations, which are at the level of strategic partnership.

At the meeting to be held in Kyiv, the two leaders, along with their accompanying delegations, will discuss possibilities to further deepen cooperation and exchange views on regional and international issues, as well as bilateral ties.

The two sides are also expected to sign various agreements and memoranda of understanding.

Thursday marks the 30th year of diplomatic ties between Turkiye and Ukraine.

Speaking to reporters ahead of his trip to Ukraine, Erdogan said that Turkiye is "closely following" developments amid recent rise in tensions between Moscow and Kyiv.

"On every platform, we voice Turkiye's support for Ukraine's territorial integrity and sovereignty," he said.

Erdogan urged all parties to exercise self-restraint and engage in dialogue to ensure peace in the region.

He underscored the need to resolve disputes peacefully and on the basis of international law, and reiterated Ankara's readiness to do its part to establish an atmosphere of peace and trust in the region.

Ukraine and Russia have been locked in conflict since hostilities in the eastern Donbas region broke out in 2014 after Russia illegally annexed the Crimean Peninsula.

Russia has also recently amassed tens of thousands of troops near Ukraine's borders, prompting fears that the Kremlin could be planning another military offensive against the former Soviet republic.

Moscow has denied it is preparing to invade and said its troops are there for exercises.

Keywords:
Recep Tayyip ErdoganUkraineVolodymyr ZelenskyUkrainian President
Your comment has been forwarded to the administrator for approval.×
Warning! Will constitute a criminal offense, illegal, threatening, offensive, insulting and swearing, derogatory, defamatory, vulgar, pornographic, indecent, personality rights, damaging or similar nature in the nature of all kinds of financial content, legal, criminal and administrative responsibility for the content of the sender member / members are belong.
Related News