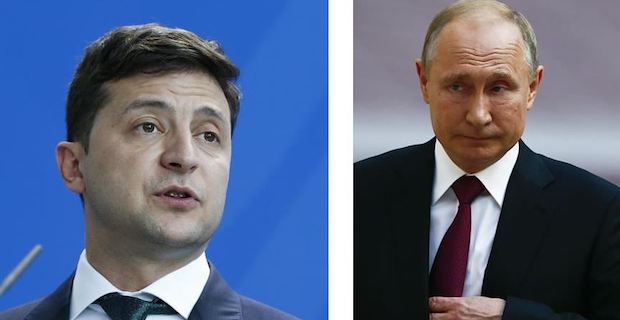 Russian President Vladimir Putin on Thursday held the first phone talk with his recently elected Ukrainian counterpart Volodymyr Zelensky. In a statement, the Kremlin said the phone talk was initiated by the Ukrainian side. "The leaders discussed issues of a settlement in the southeast of Ukraine and cooperation in returning detainees from both sides. They agreed to continue this work at the expert level," the statement said.

The leaders also discussed opportunities to continue contacts in the Normandy format, it added.

Both countries have been at loggerheads since 2014, when Russia annexed Crimea after a controversial referendum.

Ukraine has also blamed Kremlin for separatist violence in eastern Ukraine, near the border with Russia.

Keywords:
Russian President Vladimir PutinVolodymyr Zelensky
Your comment has been forwarded to the administrator for approval.×
Warning! Will constitute a criminal offense, illegal, threatening, offensive, insulting and swearing, derogatory, defamatory, vulgar, pornographic, indecent, personality rights, damaging or similar nature in the nature of all kinds of financial content, legal, criminal and administrative responsibility for the content of the sender member / members are belong.
Related News