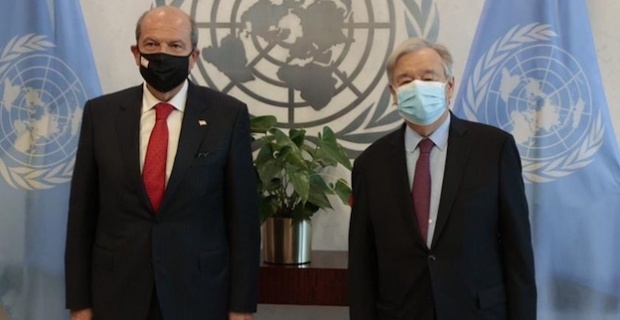 President Tatar in New York to meet UN Secretary General, says sovereign equality of Turkish Cypriots is an "indispensable” part of resolving the Cyprus dispute.Ersin Tatar, the President of the Turkish Republic of Northern Cyprus, has underlined the importance of “sovereign equality” and the “equal international status of Turkish Cypriot Side” ahead of planned meetings with UN Secretary General Antonio Guterres and the Greek Cypriot Leader Nicos Anastasiades in New York. The TRNC President has described these political principles as “indispensable” and called for them to be confirmed  by the key parties before formal Cyprus Talks are resumed. 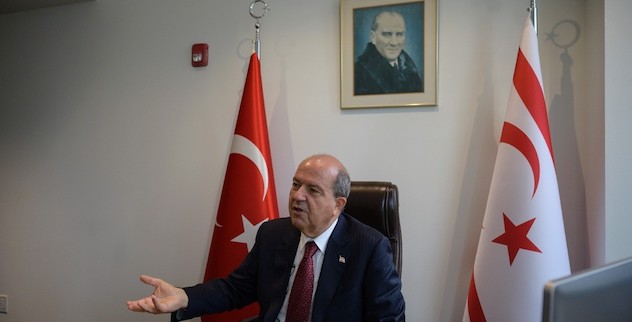 President Tatar is in New York at the invitation of the UN Secretary General (UNSG) Mr Guterres. He will hold a bilateral meeting with the UNSG on Saturday, 25 September, and also attend an informal tripartite luncheon on Monday, 27 September, with Mr Anastasiades, which is being hosted by the UNSG.

“Sadly, the Cyprus Talks are at a standstill and we cannot expect a breakthrough doing the same things that we have been doing for the last fifty years, as these have all resulted in failure. It is vital for all parties, but especially for us internationally isolated Turkish Cypriots, that the Cyprus dispute is resolved once and for all.

“We do not deserve, nor do we accept, being continuously discriminated. Since 1964, we have been denied our fundamental rights. We have no direct trade, no direct flights, and no direct communication with the rest of the world. We are denied the right to participate in international forums like the UN and at sporting events like the Olympics. 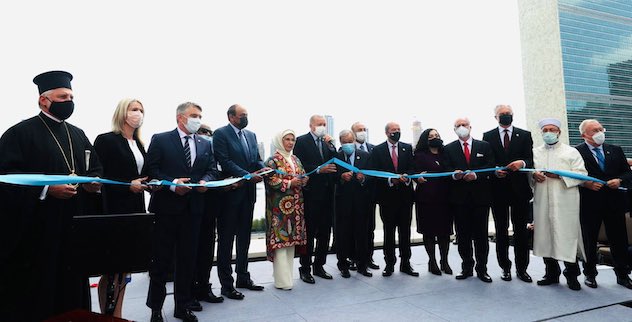 “Indeed earlier today, Mr Anastasiades had the opportunity to address the UN General Assembly, a right denied to the leader of the Turkish Cypriot people.  I won’t dignify the many distorted and anti-Turkish claims the Greek Cypriot Leader made in his speech with a detailed reply, suffice to say that it is the Greek Cypriot side that has caused suffering in Cyprus through their occupation of the seat of the bi-communal partnership Republic of Cyprus. Furthermore, Mr. Anastasiades had eight years to establish a federal settlement with two different Turkish Cypriot leaders before I was elected. He failed to do so because of the hegemonic vision dominant in Greek Cypriot society and it is unacceptable for him to keep blaming others for his own doings” said President Tatar.

“My mandate from my people is clear: to deliver a solution based on the two-State reality of the island. We cannot turn the clock back. Since 1964, Cyprus has had two separate administrations. Decades  have passed and instead of moving closer together, we remain poles apart. The world needs to ask ‘why?’ And the honest answer is that the Greek Cypriots have no incentive to strike a power-sharing agreement with us while they are the only recognised authority on the island.

“That is why we need the international community to re-confirm our sovereign equality and ensure the Turkish Cypriot side has the same equal international status as the Greek Cypriot side. These are an indispensable part of creating a permanent, peaceful and sustainable political settlement in Cyprus,” he continued.

“Turkish Cypriots are the co-founders of the Republic of Cyprus. We have sovereign equality with Greek Cypriots, as both our signatures are on all the international treaties which established this power-sharing state in 1960. However, there has been a sustained attempt to undermine and remove these rights, even by the United Nations.

“In March 1964, the UN passed Resolution 186, which referred to the Greek Cypriots as a “government” and downgraded us to a “community” status. This fundamental mistake must be rectified, and our sovereign equality expressly re-confirmed, so we can negotiate with Greek Cypriots on the basis of two equal co-owners of Cyprus. Once our equality is secured, we will have the right basis upon which to formally negotiate and resolve this dispute,” the Turkish Cypriot leader added.

During his time in New York, President Tatar attended the opening ceremony of the Turkish House in Manhattan, where the TRNC New York Representative’s Office will also be housed. He also visited the  National September 11 Museum and Memorial,  the Statue of Liberty and other New York landmarks.

Keywords:
President TatarUN Secretary GeneralCyprus DisputeTurkish Cypriots
Your comment has been forwarded to the administrator for approval.×
Warning! Will constitute a criminal offense, illegal, threatening, offensive, insulting and swearing, derogatory, defamatory, vulgar, pornographic, indecent, personality rights, damaging or similar nature in the nature of all kinds of financial content, legal, criminal and administrative responsibility for the content of the sender member / members are belong.

The Turkish Cypriots has the equal rights on the island of Cyprus..Only solution is two separate state.