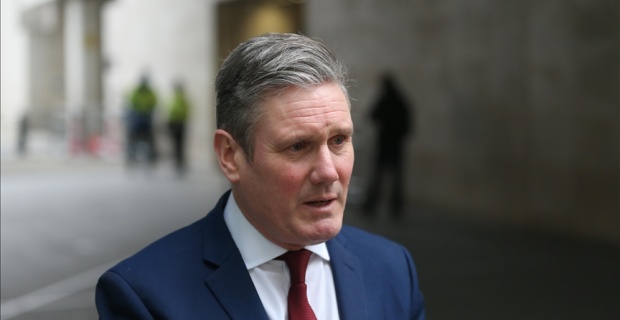 The leader of the UK’s main opposition Labour Party was ambushed Monday by protesters before being rescued by police.  Keir Starmer was surrounded by a crowd of anti-vaccination protesters who hurled verbal abuse and false claims at him before police intervened and removed him from the scene.  The virulent crowd called Starmer a “traitor” and accused him of “protecting pedophiles,” a reference to Prime Minister Boris Johnson’s false claim that Starmer had failed to investigate Jimmy Savile, one of Britain’s most notorious sex offenders.

“A man who had been surrounded by a group of protesters near to New Scotland Yard was taken away from the scene by a police car,” the Metropolitan Police said in a statement.

“A man and a woman were arrested at the scene for assault of an emergency worker after a traffic cone was thrown at a police officer. They have been taken into custody,” the force added.

Johnson has been widely blamed and criticized for stoking the riotous act after falsely accusing Starmer and failing to apologize in the House of Commons for making the erroneous claim.

Many lawmakers across the political divide have expressed disbelief in the prime minister’s statement and have called on him to withdraw the claim for the safety and protection of Starmer as well as for the transparency of the country’s democracy.

“This is appalling. People were shouting all sorts at Keir, including ‘Jimmy Savile.’ This is what happens when a prime minister descends into the gutter and recycles lies from hard-right conspiracy theorists. Political poison has an effect. Johnson has no moral compass,” Labour MP Chris Bryant said in a post on Twitter.

“What happened to Keir Starmer tonight outside parliament is appalling. It is really important for our democracy & for his security that the false Savile slurs made against him are withdrawn in full,” former chief whip Julian Smith said.

The mayor of London, Sadiq Khan, who also hails from the Labour Party, condemned Johnson and accused the premier of stoking violence and discord by spreading what he termed as fake news.

Foreign Secretary Liz Truss also conveyed her shock and dismay at the chaotic scenes outside of parliament, calling for the safety of parliamentarians regardless of political allegiance.

“This is what happens when fake news is amplified and given credibility by people who should know better. Solidarity with Keir Starmer and David Lammy. Thank you to the Met officers for their swift intervention,” Khan said.

“Shocked by the scenes outside Parliament today. It is important in our democracy that @Keir_Starmer, @DavidLammy and all Parliamentarians should be able to go about their work without fear. This intimidation must stop. Thanks to the police for taking action,” Truss said on Twitter.

Johnson has come under intense scrutiny and criticism after falsely accusing Starmer of protecting pedophile and child abuser Jimmy Savile by failing to prosecute him when he was a lawyer.

Johnson has failed to retract his false claim despite many within his party and administration disagreeing with him and distancing themselves from the prime minister.

The slur will add pressure to the already embattled prime minister who is in a fight for survival as his premiership teeters on the brink of collapse following revelations of illegal parties during periods of national coronavirus lockdowns.

Keywords:
UKLondonLabour Party
Your comment has been forwarded to the administrator for approval.×
Warning! Will constitute a criminal offense, illegal, threatening, offensive, insulting and swearing, derogatory, defamatory, vulgar, pornographic, indecent, personality rights, damaging or similar nature in the nature of all kinds of financial content, legal, criminal and administrative responsibility for the content of the sender member / members are belong.
Related News