Geldof was a regular face at London Fashion Week, and is seen here with Rosario Dawson 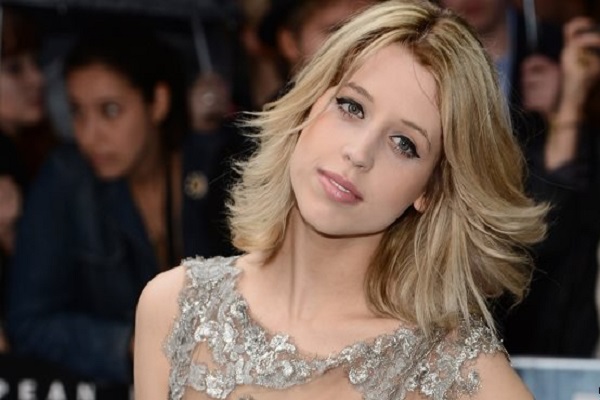 "We are beyond pain," said her father, confirming her death. "She was the wildest, funniest, cleverest, wittiest and the most bonkers of all of us."

"What a beautiful child. How is this possible that we will not see her again? How is that bearable?"

Police say the death is currently being treated as "unexplained and sudden".

Peaches has died. We are beyond pain. She was the wildest, funniest, cleverest, wittiest and the most bonkers of all of us.

Writing "was" destroys me afresh. What a beautiful child. How is this possible that we will not see her again? How is that bearable? We loved her and will cherish her forever. How sad that sentence is.

Tom and her sons Astala and Phaedra will always belong in our family, fractured so often, but never broken.

Born in 1989, Peaches Honeyblossom Geldof embarked on a media career at the age of 15, when she began writing a column for Elle magazine.

She left home at 16 and went on to contribute to the Telegraph and the Guardian, as well as TV shows including ITV2's OMG! with Peaches Geldof.

She also worked as a model and, just last week, attended a launch for Tesco's F&F clothing range in London.

The writer and presenter was married to musician Thomas Cohen, with whom she had two sons, Astala, one, and Phaedra, who will turn one on 24 April.

"My beloved wife Peaches was adored by myself and her two sons," said Cohen in a statement.

"I shall bring them up with their mother in their hearts everyday. We shall love her forever."

TV presenter Paula Yates died of an accidental drug overdose in September 2000, after splitting with Bob Geldof and forming a relationship with INXS frontman Michael Hutchence. Hutchence died in 1997.

Speaking to Elle Magazine in 2012, Peaches said she had not come to terms with Yates's death for several years.

"I remember the day my mother died, and it's still hard to talk about it. I just blocked it out. I went to school the next day because my father's mentality was 'keep calm and carry on'," she said.

"So we all went to school and tried to act as if nothing had happened. But it had happened. I didn't grieve. I didn't cry at her funeral. I couldn't express anything because I was just numb to it all. I didn't start grieving for my mother properly until I was maybe 16."

Geldof said she had experimented with drugs as a teenager, but was "never that wild".

She was previously married to rock musician Max Drummey but the pair separated in 2009 after a six-month marriage.

Her final tweet, posted on Sunday, linked to an Instagram picture of her, as a baby, in her mother's arms.

The caption simply read: "Me and my mum."

In a statement, Kent Police said: "Police were called at 13:35 on 7 April, 2014 to an address near Wrotham following a report of concern for the welfare of a woman.

"Officers are working to establish the circumstances around the death."