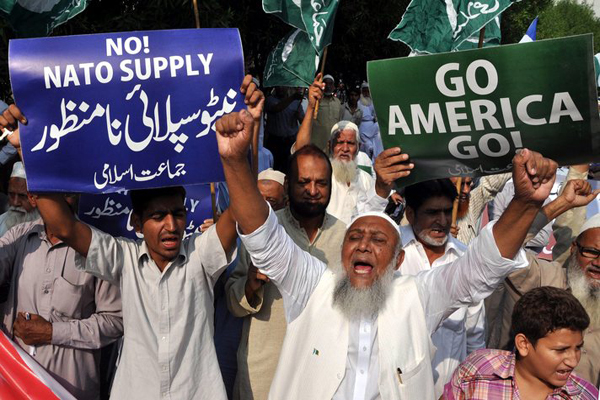 Supplies to NATO-led occupying forces in Afghanistan remained suspended on Friday after supporters of an Islamist political party held a sit-in on a main highway leading to a key NATO supply route. "Today's sit-in is just a trailer," Peshawar Secretary-General Shabbir Ahmed Khan told protesters. "If the federal government does not take a decision [to block NATO supplies] soon," he warned, "then the JI will give a call to the masses and block NATO supplies for an indefinite period." Hundreds of supporters of the Jamaat-e-Islami (JI) staged an hours-long sit-in on Friday on a main Peshawar highway leading to the northeastern Torkhum border, a key NATO supply route. "Go America, go," "Stop NATO supply," and "Pakistan and Afghanistan: graveyard of Americans" were among some of the slogans chanted by protesters, who carried green-and-blue party flags. Hundreds of NATO container trucks, which had been supposed to cross on Friday, were halted in northeastern Punjab province.

"These NATO containers do not carry flowers to shower on Afghans. They carry lethal weapons to kill Afghans. How can a Muslim country justify the use of its soil for [the] killing of Muslims?" Khan, a former MP, asserted.

The JI is the second largest coalition partner in the provincial government of northwestern Khyber Paktunkhawa (KP), which shares a border with Afghanistan.

Cricketer-turned politician Imran Khan, whose Pakistan Tehrik-e-Insaf (PTI) rules the KP province, has given the federal government until November 20 to block NATO supplies until the US halts drone attacks inside Pakistan.

If the government fails to halt the supplies, Khan has threatened mass protests.

The ultimatum was issued following the death last week of Pakistan Taliban leader Hakimullah Mehsud in a suspected US drone attack in North Waziristan.

The Pakistani government, the PTI and the JI have all described the drone attack that killed Mehsud as the "murder of peace."

Torkhum, which lies adjacent to northeastern Afghanistan, is one of two NATO supply routes through which US-led foreign forces transport 80 percent of their supplies into war-ravaged Afghanistan.