Over 60 Taliban militants killed in Afghanistan

Afghanistan witnessed evident surge in violence amid rejuvenated peace talks between US, Taliban 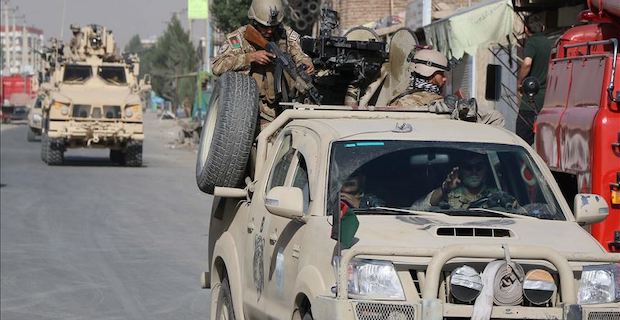 The U.S. and Afghan security forces killed more than 60 Taliban militants in Logar and Kandahar provinces, officials said on Thursday. According to Shahpur Ahmadzai, spokesman for the police headquarters in Logar, the security forces conducted a clean-up operation in the restive Azara district on Wednesday night, killing 45 Taliban fighters and wounding 15 others.

A large number of militants had gathered here to wage a massive assault in the district located at a distance of less than 100 kilometers (62 miles) from the capital Kabul, Ahmadzai told Anadolu Agency.

He said one security personnel was killed and eight others were wounded in the operation.

Jamal Nasir, spokesman for the police headquarters in southern Kandahar province, said at least 22 Taliban militants were killed in a join operation by the U.S. and Afghan forces.

Speaking to Anadolu Agency, Nasir said the militants stormed security check posts in the Arghistan district that prompted the security forces to call for aerial support.

Nasir said the U.S. air raid combined with ground offensives by the Afghan forces left 22 insurgents killed and 11 others wounded.

There has been no immediate reaction from the Taliban on these two incidents.

The group’s spokesman, however, took responsibility for a separate improvised explosive device attack on a security check post in Kabul that killed two policemen.

Afghanistan has witnessed an evident surge in violence recently amid rejuvenated peace talks between the U.S. and Taliban in Doha, Qatar.

Keywords:
AfghanistanTalibanTaliban Militants
Your comment has been forwarded to the administrator for approval.×
Warning! Will constitute a criminal offense, illegal, threatening, offensive, insulting and swearing, derogatory, defamatory, vulgar, pornographic, indecent, personality rights, damaging or similar nature in the nature of all kinds of financial content, legal, criminal and administrative responsibility for the content of the sender member / members are belong.
Related News