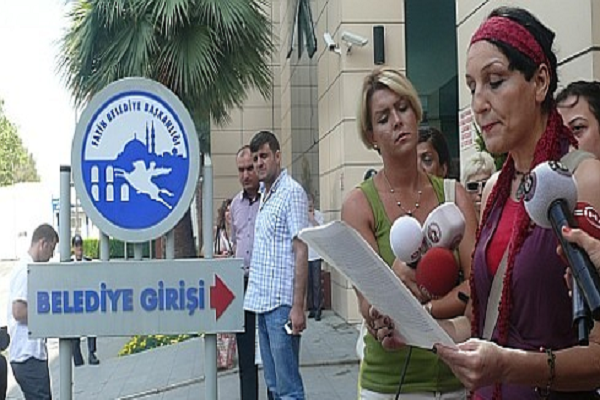 A number of non-governmental organizations (NGOs) and professional chambers came together on Wednesday to issue a joint press release in protest of the rights violations emanating from the government's "urban transformation" scheme. The protesters also filed a formal complaint against the Fatih Municipality in Istanbul on the grounds they had forged false documents and zoning plans in connection with the project in the neighborhood of Tokludede. Among the participants in the demonstration spearheaded by the Istanbul Urban Movements were the Chamber of Architects, the Chamber of Urban Planners, the Chamber of Electrical Engineers, the Contemporary Journalists Association and a host of other NGOs.

"Forcing residents to abandon their homes"

The "urban transformation" work undertaken by the Fatih Municipality in the districts of Ayvansaray, Tokludede and Sulukule violates the laws, Çiğdem Şahin, a member of the Istanbul Urban Movements' Executive Board, said while speaking on behalf of the protesters. Many municipalities, and the Fatih Municipality in particular, are forcing residents to abandon their homes through harassment and pressure, and officials have taken no steps to protect the aggrieved parties, Şahin said. "The lack of any supervision or sanctions and [the authorities' attitude of] virtually rewarding such efforts augment the municipalities' boldness, recklessness, their violation of people's rights and the pressure on locals," she added. Şahin said they were aiming to criticize and rectify the problematic approach of all municipalities in general toward the process of "urban transformation" by pressing their case against the Fatih Municipality. Municipal services in Turkey have come to the point where the ethical aspects of their conduct have become questionable, she said, adding that the scandalous forging of false project documents and zoning plans in Ayvansaray and Tokludede constitute merely the last thread in a string of such unlawful practices undertaken within the scope of the "urban transformation" scheme.

"Deceiving the people through forgery and fraud"

"It turned out that the Fatih Municipality forged a second false project and zoning plan with the same date and number as the project and zoning plans already approved by the Conservation Council with the idea of presenting it to the public. The crime in question here is not just about the project and the zoning plans. The crime in question here also pertains to aggravated fraud, forgery and tampering with official documents to systematically deceive the people in order to take away their homes," Şahin said. (NV)