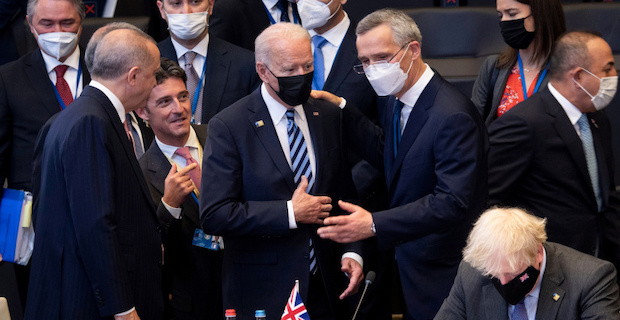 The NATO summit gathering heads of member states and governments has begun on Monday in Brussels. Including Turkish President Recep Tayyip Erdogan, the leaders of 30 member countries were welcomed one by one by NATO Secretary-General Jens Stoltenberg ahead of the meeting.

The leaders will discuss a wide range of issues, including the main themes of the NATO 2030 initiative: how to reinforce the alliance's unity, broaden its approach to security, and contribute to safeguarding the rules-based international order.

Also, decisions to prepare NATO for the challenges of today and tomorrow, including Russia's pattern of aggressive behavior, terrorism, cyber-attacks and disruptive technologies, the rise of China, and the security implications of climate change, will be taken.

Transatlantic relations are also among the topics as the US will attend the summit under the new Biden administration.

Stoltenberg will hold a press conference at the end of the meeting. Additionally, a closing statement will be shared by NATO.

Since Sunday evening, the leaders were holding bilateral meetings on the sidelines of the summit and those meetings will continue to be held until the end of the summit.

Keywords:
NATONATO SummitBrussels
Your comment has been forwarded to the administrator for approval.×
Warning! Will constitute a criminal offense, illegal, threatening, offensive, insulting and swearing, derogatory, defamatory, vulgar, pornographic, indecent, personality rights, damaging or similar nature in the nature of all kinds of financial content, legal, criminal and administrative responsibility for the content of the sender member / members are belong.
Related News