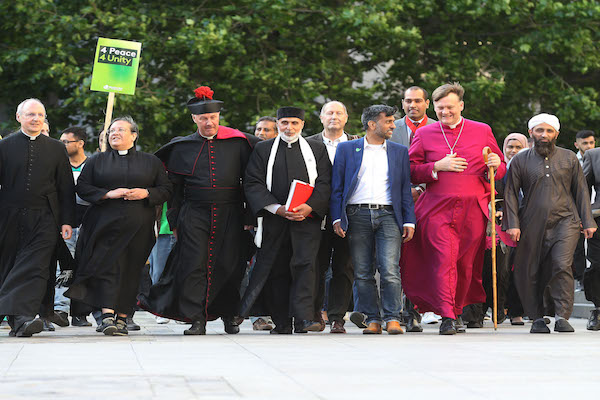 International relief and development charity Muslim Aid brought together interfaith leaders including the Bishop of Fulham and the representatives from the Muslim Council of Britain to walk from St Paul’s Cathedral to the East London Mosque on Saturday 10 June 2017.  The faith leaders joined the London Sunset Walk to recognize the good works that people of faith do to support those less fortunate around the world, including refugees and displaced peoples. The Rt Revd Jonathan Baker, the Bishop of Fulham, and Canon Tricia Hillas of St Paul’s Cathedral, greeted the walkers at St Paul’s and joined the early evening walk to the East London Mosque, where they shared in an ifthar, the evening meal to end the Ramadan fast at sunset.  Saturday was the fifteenth day of the month of Ramadan.  At the mosque, they were joined by Leon Silver, President of the East London Central Synagogue.

“Bereaved and affected families are on our minds as we walkfor peace” said Muslim Aid CEO Jehangir Malik. “We are utterly horrified about what happened to innocent people in London and Manchester.  This is prompting us to remember victims of extreme violence around the world – such as nearly 70 children killed by a car bomb in Syria three months ago, the millions who are displaced in their own country or become refugees elsewhere. We want to hold all those in our global family in our hearts.” Muslim Aid is supporting victims of the Syrian situation in 14 hospitals and a trauma centre in Syria, as well as in emergency relief projects in Lebanon and Jordan. Speaking on the steps of St Paul’s before the walkers set off, Canon Hillas said:  “Intrinsic to people of goodwill around the world is the desire to work for the good, well-being and flourishing of all people. Charity and the practical support of those in need is a shared imperative for people of faith; encapsulated for Christians in the command of Jesus that we are to ‘love our neighbour’. In this month, so holy to Muslims, our friends and neighbours, we are delighted to welcome supporters of Muslim Aid as they seek to respond to the needs of those affected by war, famine, illness and poverty”.

Later at the Mosque, the Rt Revd Jonathan Baker, Bishop of Fulham, said: “We are walking together to remember victims of religious violence around the world and especially victims of the appalling attacks in the capital last week. Religious extremism is a global problem, and I would reaffirm what the Archbishop of Canterbury said last week - it is the responsibility of faith leaders to counter extremism within our ranks. I hope the world will take inspiration from East London, where Christians, Muslims, Jews and others live, work and worship side by side, using every day to strengthen the bonds between our communities.” Also speaking at the mosque, the Revd Preb. Alan Green, Rector, St John on Bethnal Green and Chair of the Tower Hamlets Inter Faith Forum, said: "We are not leaders of nations, or part of an army, so how do we respond to bombs and murder in Tehran, Syria, Manchester, London? By refusing the fragmentation and the fear that these killers wish to instill into our open society. In Tower Hamlets, 500 years of welcoming immigrants and refugees has taught us to live well together. We seek to learn from and to show solidarity with those who are different from us, but share a common understanding of what is to be a loving human being. In the face of fear, murder and ignorance, we continue to proclaim that we are better together and we have no place for hate."

Speaking on Friday before the event, Harun Khan, Secretary General of the Muslim Council of Britain, said: 'British Muslims around the country are feeling the reverberation of shocks over what has happened in London and Manchester.  These actions hurt us deeply, especially at Ramadan, as they are going against the teaching of Islam.  At MCB, we are resolved of the need to combat hate and work with all organisations to promote peace and understanding between communities. For this reason, we are very pleased Muslim Aid is bringing together the interfaith community this weekend'.  The MCB, which represents 500 national, regional and local organisations, mosques, charities and schools, will be represented by an Imam on the walk.