Mohamed Morsi and 14 other defendants was postponed to February 1. 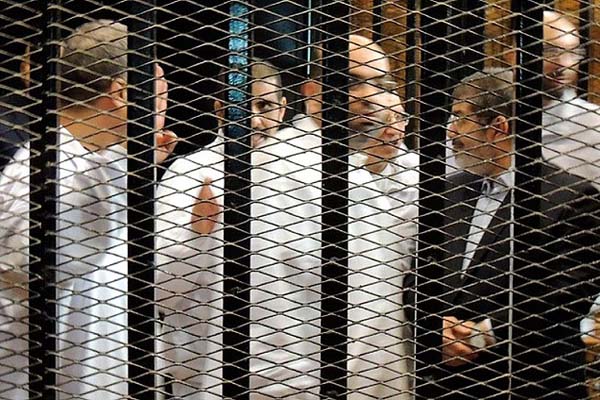 The Cairo Criminal Court on Wednesday postponed the trial of ousted president Mohamed Morsi and 14 other defendants to February 1, according to an Anadolu Agency reporter inside the courtroom. Egyptian authorities had earlier announced that Morsi had not been flown to Cairo for his trial – despite earlier reports to the contrary – according to state-run television. Alexandria security chief Amin Ezz al-Din said Morsi could not be flown to Cairo from his Alexandria jail due to bad weather. Morsi – Egypt's first freely-elected president, who was ousted by the army last summer after only one year in office – had been due to appear in court today with seven other defendants for the second time. The defendants face charges, which they insist are politically motivated, of inciting the murder of opposition demonstrators in late 2012.

Egyptian security officials outside the Cairo Police Academy, in which the courthouse is located, said earlier Wednesday that Morsi had arrived to the trial venue, claiming that a helicopter seen landing inside the venue was carrying the ousted president.

The report was initially confirmed by state television.

A first court session, which marked Morsi's first public appearance since his July 3 ouster and subsequent imprisonment, was held in early November.

Seven other defendants are being tried in absentia.

Morsi refuses to recognize the trial's legitimacy and has thus far refused to take on any formal legal representation.