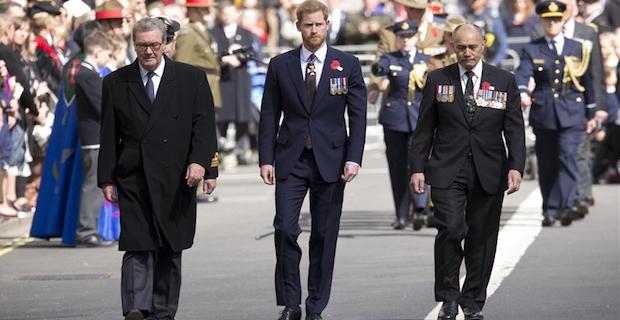 AVRUPA\LONDON - A ceremony at the Gallipoli Cenotaph in central London commemorated Wednesday the tens of thousands of fallen soldiers in one of the toughest battles in Canakkale, Turkey, 103 years ago.Representing the royal family, Prince Harry laid a wreath at the Cenotaph at the ceremony, which was attended by Foreign Secretary Boris Johnson, Defense Secretary Gavin Williamson and Turkey’s Ambassador to the U.K. Abdurrahman Bilgic.The ceremony was one of a few events commemorating the fallen British, Australian, New Zealander and Turkish soldiers in the 1915 campaign.Earlier, Prince Harry attended a dawn ceremony at the Wellington Arch with his fiancee Megan Markle. The couple also attended a special memorial service at the Westminster Abbey.Bilgic also attended a wreath-laying ceremony at the Gallipoli Memorial in the Crypt of St. Paul’s Cathedral and the service at the Westminster Abbey.

The year 2018 marks the 103rd anniversary of the battle in the Canakkale (Dardanelles) Strait in Canakkale's Gelibolu district, which served as a turnaround in favor of the Turks fighting in World War I against the then Allied Forces.

They started their attack on March 18 -- the day commemorated as Canakkale Naval Victory Day -- but the waters were filled with a network of mines laid by Ottoman vessels.

The events leading up to the momentous battle started in February 1915, when Britain and France decided to launch the Gallipoli campaign to knock the Ottoman Empire out of the war as quickly as possible by reaching and capturing its capital, Istanbul.

On April 25, 1915, nine months into the World War I, Allied soldiers landed on the shores of the Gelibolu peninsula. The troops were there as part of a plan to open Canakkale Strait on Turkey's Aegean coast to Allied fleets, allowing them to threaten the then-Ottoman capital, Istanbul.

The Allied Forces, however, encountered strong and courageous resistance from the Turks and the campaign turned out to be a costly failure. Tens of thousands of Turkish nationals and soldiers died, along with tens of thousands of Europeans, plus around 7,000 - 8,000 Australians and nearly 3,000 New Zealanders.

Victory against the Allied forces boosted the morale of the Turkish side, which then went on to wage a war of independence between 1919 and 1922, and eventually formed a republic in 1923 from the ashes of the old empire.

April 25 is also known as ANZAC Day in Australia -- a significant national holiday that honors the Australian and New Zealand Army Corps (ANZAC) who fought and died in Canakkale on Turkey's western coast in 1915.

Keywords:
Gallipoli Fallen SoldiersGallipoliPrince Harry
Your comment has been forwarded to the administrator for approval.×
Warning! Will constitute a criminal offense, illegal, threatening, offensive, insulting and swearing, derogatory, defamatory, vulgar, pornographic, indecent, personality rights, damaging or similar nature in the nature of all kinds of financial content, legal, criminal and administrative responsibility for the content of the sender member / members are belong.
Related News