Turkey's Disaster and Emergency Management Authority announced that rescue teams were dispatched to Giresun during the initial minutes of the natural disaster. 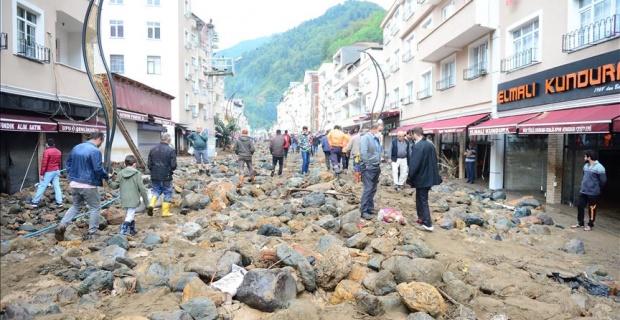 The death toll from floods in Turkey’s Black Sea province rose to 4, the country’s interior minister said on Sunday. Those who lost their lives included a gendarmerie officer.Interior Minister Suleyman Soylu said 11 people were reported missing in the northeastern province of Giresun, while 127 people have been rescued.

He said that roads to 118 villages were closed.

Earlier, Soylu, who arrived at the scene, said five gendarmerie officers and an excavator operator went missing after a 5-meter (16-foot) high culvert collapsed due to floods in the region.Efforts continued to rescue people at a wedding hall in Dereli district and guests were being taken to a safe place.

Referring to information received from the state meteorology authority, he said rains, which started Saturday, reached 137 kilograms (302 pounds) of density and affected districts. He warned that 50 to 100 kilograms (110 to 220 pounds) of rainfall is expected in the Canakci, Gorele and Dogankent districts Sunday.

Earlier, Giresun's Governor Enver Unlu told Anadolu Agency about a number of stranded people who have not been identified and several people have been rescued by teams.

He said efforts to get to those who are stranded would begin at first light in the morning and crews are working on opening access to roads and vehicles and heavy equipment are waiting for waters to recede before they enter.

Flood waters caused vehicles in Dereli to drift and buildings were also destroyed in the area, while security forces are trying to confirm reports about missing persons, he said.

Turkey's Disaster and Emergency Management Authority (AFAD) announced that rescue teams were dispatched to Giresun during the initial minutes of the natural disaster.

Keywords:
LatestFloodsBlack Sea RegionTurkey FloodTurkeys Disaster And EmergencyAfadHeavy Rain
Your comment has been forwarded to the administrator for approval.×
Warning! Will constitute a criminal offense, illegal, threatening, offensive, insulting and swearing, derogatory, defamatory, vulgar, pornographic, indecent, personality rights, damaging or similar nature in the nature of all kinds of financial content, legal, criminal and administrative responsibility for the content of the sender member / members are belong.
Related News