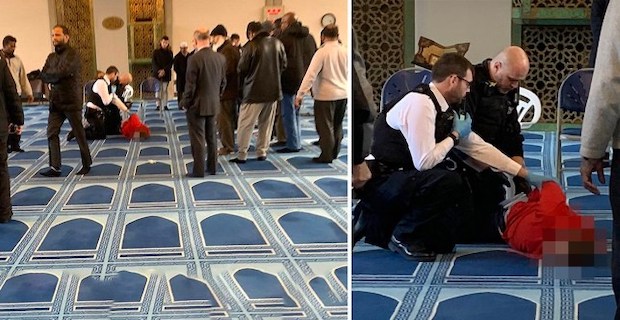 Police swooped on a central London mosque after a Muslim holy many was stabbed in the neck.  According to witnesses at the scene the attacker stabbed the Muaddin in the neck in the Regent's Park Mosque shortly after 3pm today.  Footage of the scene shows a man in a red jumper restrained on the blue floor of the west London place of worship.  He was arrested on suspicion of attempted murder. The victim, in his 70s, has been taken to a major trauma centre but he is condition is not life threatening.

In one video of the incident the suspect can be seen on the floor with no shoes on.  His feet do not appear to dirty despite the rainy weather outside, suggesting he removed his shoes inside the buildings as those praying in Mosques typically do.  In one clip he can be seen being marched out of the mosque by several Metropolitan Police officers while worshippers watch on.

One man who uploaded videos from the scene tweeted: "This is absolutely terrible.  "No Muslim is safe in their places of worship!!" A spokesperson for the police said: "Police were called to a mosque in Park Road, NW8, at 15.10hrs on Thursday, 20 February, to reports of a stabbing.

"Officers attended along with paramedics from the London Ambulance Service (LAS). A man, in his 70s, was found with stab injuries. "He was treated by paramedics before being taken to hospital. His condition has been assessed as non life-threatening.

Keywords:
KnifemanRegents Park Mosque
Your comment has been forwarded to the administrator for approval.×
Warning! Will constitute a criminal offense, illegal, threatening, offensive, insulting and swearing, derogatory, defamatory, vulgar, pornographic, indecent, personality rights, damaging or similar nature in the nature of all kinds of financial content, legal, criminal and administrative responsibility for the content of the sender member / members are belong.
Related News