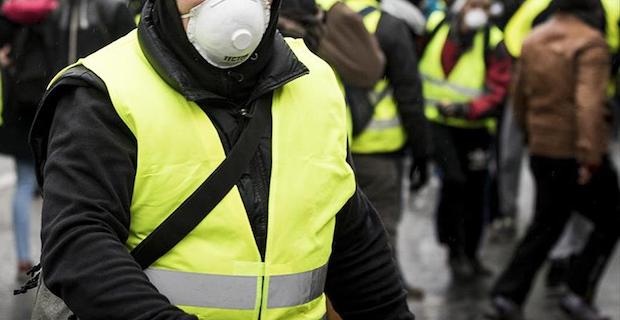 One of the leading figures of France’s Yellow Vest movement will face trial on Feb. 15 for organizing an “unauthorized protest", the Paris prosecutors’ office said Thursday.

Eric Drouet -- a 33-year-old truck driver -- was detained by police late Wednesday for organizing a demonstration in central Paris without declaring it, it said.

He said he could not understand why high-ranking officials were present at his interrogation, adding the demonstrations will continue.

"It's normal that when you break the laws of the republic, you face the consequences," he said.

"Abuse of power. A politicized police targeting and harassing the leaders of the Yellow Vest movement," he wrote on Twitter.

Around 50 activists had gathered late Wednesday in Concorde Square near the Champs-Elysees avenue to commemorate the 10 people who had died during the months of protests in France as well as the injured.

Shortly after, police detained Drouet along with a group of activists on the grounds of an "unauthorized" demonstration.

Drouet was also detained during a Yellow Vest demonstration on Dec. 22.

In France, the penalty for organizing a demonstration without official permission is up to six months in prison and a €7,500 ($8,545) fine.

The Yellow Vest protests, which began in reaction to controversial fuel tax hikes introduced by French President Emmanuel Macron and evolved into an uprising against him, are continuing despite a call by the government to halt them.

Since Nov. 17, thousands of protesters wearing bright yellow vests -- dubbed the Yellow Vests -- have gathered in major French cities, including the capital Paris, to protest the tax hikes and the deteriorating economic situation in France.

In mid-December, under pressure from weeks of protests, Macron announced an increase in the minimum wage and also scuttled the fuel tax hikes.

At least 10 people have been killed and more than a thousand others wounded in the protests, while over 4,500 have been detained.

Keywords:
Key YellowEric Drouet
Your comment has been forwarded to the administrator for approval.×
Warning! Will constitute a criminal offense, illegal, threatening, offensive, insulting and swearing, derogatory, defamatory, vulgar, pornographic, indecent, personality rights, damaging or similar nature in the nature of all kinds of financial content, legal, criminal and administrative responsibility for the content of the sender member / members are belong.
Related News