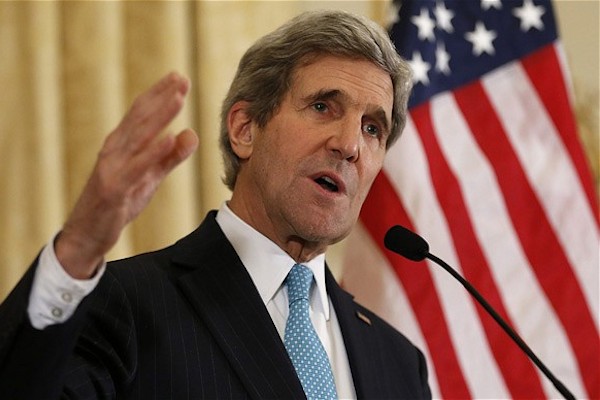 America's top diplomat called for Israeli and Palestinian officials to abide by a recently brokered ceasefire, as he cautioned that challenges remain. "We strongly support today’s ceasefire agreement, and call on all parties to fully and completely comply with its terms," U.S. Secretary of State John Kerry said in a statement. "We are approaching the next phase with our eyes wide open. We have been down this road before and we are all aware of the challenges ahead."  An Egyptian-brokered ceasefire between Israel and Palestinian factions in the Gaza Strip went into effect at 7 p.m. local time Tuesday. The deal includes the opening of all border crossings between the Gaza Strip and Israel, which would effectively signal the end of Israel's years-long embargo of the coastal enclave. "We are all aware that this is an opportunity, not a certainty," Kerry said.
Thousands of Palestinians took to the streets across Gaza on Tuesday to celebrate the accord.  Since hostilities first erupted June 7, at least 2,143 Palestinians, mostly civilians, have been killed and nearly 11,000 injured, according to the Palestinian Health Ministry. In addition, thousands of homes and commercial properties have been partially or completely destroyed by Israeli attacks. Kerry said that the U.S. is prepared to work alongside international partners to accelerate the delivery of humanitarian assistance to the people of Gaza, and help rebuild the coastal enclave "with appropriate measures in place to ensure that this is for the benefit of the civilian population in Gaza, not Hamas and other terrorist organizations." He said that Washington will work with the Palestinian Authority and President Mahmoud Abbas on the efforts.