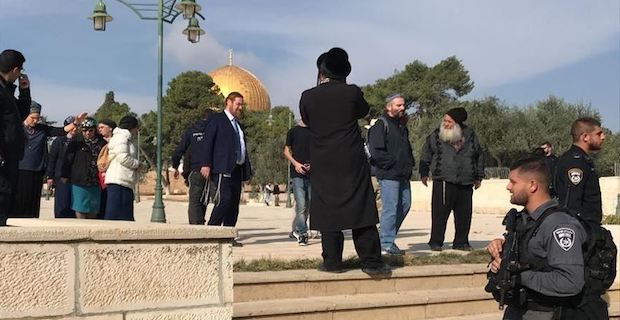 Israeli Minister of Agriculture and Rural Development Uri Ariel and former member of Knesset for Likud party Yehuda Glick were among the settlers, according to the witnesses.

Many Jewish extremist groups called on to storm Al-Aqsa Mosque to mark the Jewish Yom Kippur which begins Tuesday night, and lasts until Wednesday.

The police are backing all the settlers every day except for Friday and Saturday.

The Islamic Endowments Council in Jerusalem calls on exerting pressure against the Israeli government to halt these incursions.

Israel occupied East Jerusalem -- in which the Al-Aqsa is located -- during the 1967 Middle East War. In 1980, Israel unilaterally annexed the entire city, claiming it as its "eternal and undivided" capital.

Keywords:
Jewish Extremist GroupsJewishIsraeli Minister
Your comment has been forwarded to the administrator for approval.×
Warning! Will constitute a criminal offense, illegal, threatening, offensive, insulting and swearing, derogatory, defamatory, vulgar, pornographic, indecent, personality rights, damaging or similar nature in the nature of all kinds of financial content, legal, criminal and administrative responsibility for the content of the sender member / members are belong.
Related News