Israeli jets have attacked two areas in the Gaza Strip 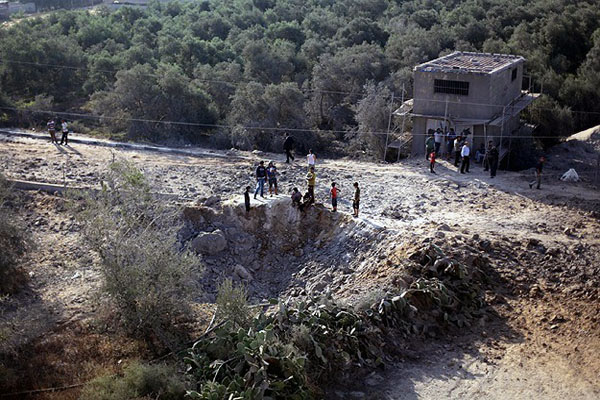 Israeli warplanes have attacked two areas in the Gaza Strip, leaving two Palestinians injured, a medical official said on Thursday night. A first strike targeted an uninhabited land in al-Manara, northeastern Gaza City, leaving two Palestinians slightly injured, Ashraf al-Qadra, spokesman for the Gaza Health Ministry. The second targeted a military site of Ezzedeen Al-Qassam Brigades, the armed wing of the Palestinian Hamas resistance group, but left no injuries, he added. The attacks came after Israeli army radio said that a rocket was fired into southern Israel from the Gaza Strip. The rocket landed in an empy area near the city of Ashkelon, the broadcaster said. It triggered alert sirens in the area but it had not caused any human or material damage, the radio said. The rocket firing is the second in the day. Earlier in the day, a rocket landed near a settlement in Ashkelon, leaving no causalities or material damage. No group has claimed responsibility for the alleged attacks. Last November, Israel signed an Egypt-brokered ceasefire with Gaza-based Palestinian groups. The truce followed eight days of unrelenting Israeli raids on the strip that left 190 Palestinians dead and more than 1,500 injured.