The number of people known to have died in Indonesia in Friday's earthquake and tsunami has risen to more than 1,200, the country's disaster response agency says 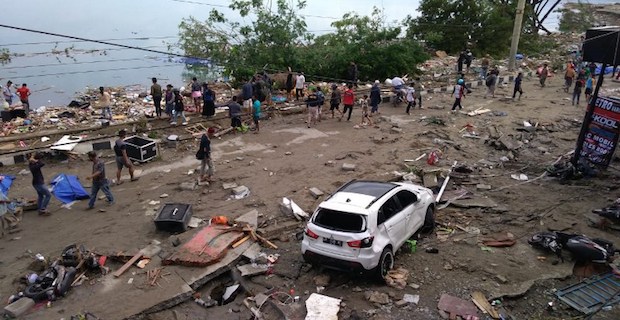 The death toll jumped on Tuesday from a previous confirmed figure of 844.

The 7.5-magnitude quake struck just off the central island of Sulawesi, setting off a tsunami that engulfed the coastal city of Palu.

People there are growing increasingly desperate for food, fuel and water.

Humanitarian relief convoys entering the city are now being escorted by soldiers and police.

And there are fears some survivors may still be trapped under the rubble of buildings.

Everyone we meet in Palu is focused on trying to get basic goods for their families. All normal services in the town have broken down and there's little running water, power, food or drinking water. People are desperate.

We saw one group of armed police guarding a shop, being pressed by local people to let them in.

Suddenly the police shouted, warning everyone to back off, followed by volleys of shots fired in the air and tear gas. Some of the men threw stones at the police; for a moment it seemed it might escalate.

Yet an hour later the police backed down and let the crowd in. The atmosphere was transformed, from anger to jubilation as people came running down the street clutching shopping bags.

The police tried to stop people taking non-food items - some were made to empty the sacks bulging with commandeered produce, and hand over plastic toys and toiletries.

One officer wearily told me it was his responsibility to protect the shop - but what could he do when people needed so much?

Are there still hopes for finding survivors?

Indonesian Red Cross officials have told the BBC that the bodies of 34 Indonesian students were found under a church buried by a mudslide.

They were among a group of 86 students reported missing from a Bible camp in the Jonooge Church Training Centre. The whereabouts of the other 52 students are not known.

"The mud conditions in that area are terrible, we have to walk about 1.5 hours to reach [the mudslide area], that makes it very difficult," Ridwan Sobri, a spokesperson for the Indonesian Red Cross told the BBC.

Mr Sobri said the identities and ages of the students could not yet be confirmed.

Rescuers are also still hunting for survivors in the ruins of a four-storey hotel in the town.

An estimated 50 people were inside the Hotel Roa Roa when it collapsed. About 12 people have been recovered - only three came out alive.

"We have to be very careful so we don't risk hurting any survivors when we move the debris," the head of the rescue team, Agus Haryono, told Reuters.

Why are people struggling to get help?

Across Palu, blocked roads, a damaged airport and broken telecommunications have made it difficult to bring help into the affected area, and impossible to contact more remote regions.

With hospitals damaged, injured people have been treated in the open and at least one military field hospital has been set up.

The military has taken over the airport to fly aid in, and injured people and other evacuees out.

But for thousands of people wanting to get the first commercial flight out of Palu, the wait continues.

On Monday, 3,000 to 5,000 people who wanted to evacuate from Palu swarmed the airport hoping to hitch a ride on a military Hercules plane. The military arranged for them to depart on ferries instead.

Hercules planes are used to evacuate the injured who are in urgent need of medical treatment.

The charity Save the Children says many of the children in Palu "will have experienced unimaginable trauma and distress".

"Losing their mother or father, and watching everything they have known washed away," said the charity's Tom Howells.

Many people are having to sleep in makeshift shelters or on the street, with little access to food, medication or emotional support, added Mr Howells. 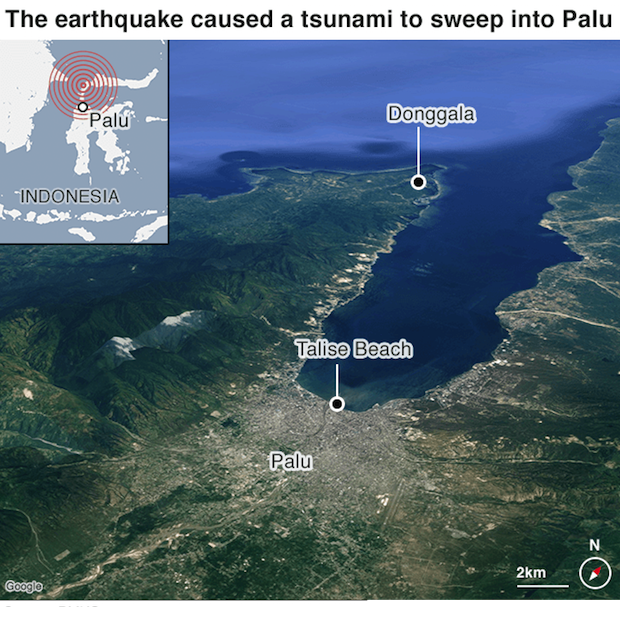 Why was the disaster so bad?

The earthquake was powerful but shallow and with more lateral than vertical movement, not typically the kind of tremor that sets off tsunamis.

Vice-President Jusuf Kalla has said the final death toll could be in the thousands while the Red Cross estimates that more than 1.6 million people have been affected.

Keywords:
Indonesia TsunamiEarthquake
Your comment has been forwarded to the administrator for approval.×
Warning! Will constitute a criminal offense, illegal, threatening, offensive, insulting and swearing, derogatory, defamatory, vulgar, pornographic, indecent, personality rights, damaging or similar nature in the nature of all kinds of financial content, legal, criminal and administrative responsibility for the content of the sender member / members are belong.
Related News