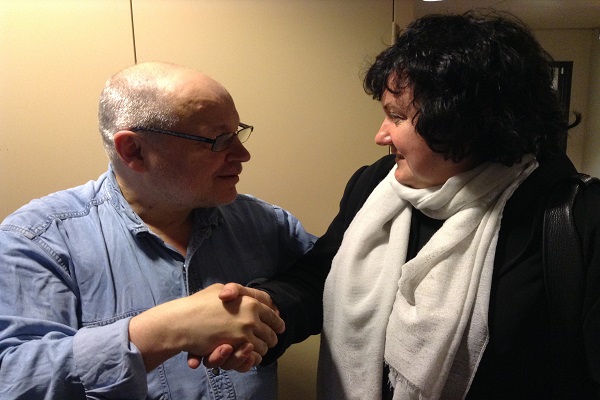 IFJ's Ukrainian and Russian affiliates agreed on a co-ordinated plan of action to support journalists covering events in Crimea, Kiev's Maidan Square and across Ukraine. They have issued a joint call in which they state:

"Over recent months journalists in Ukraine have been subjected to an unprecedented level of pressure, intimidation and violence in their efforts to report the demonstrations and protests that started in Kiev and have since moved across the country. Political groups have sought to use media as propaganda tools to further their interests.

"With events moving swiftly and the prospect of an end to the instability increasingly distant, we call on the respective authorities in Ukraine and Russia to ensure that all journalists be permitted to operate in a free and safe environment and that all pressure to distort and manipulate the news ends."

As a result of the very positive meeting, the following points of action were agreed:

1. To reaffirm the principles and concepts enshrined in the IFJ Declaration of   Principles on the Conduct of Journalists which they will endeavour to champion among their members, in particular respect for truth, striving for independence and fairness, and doing no harm.

2. To strongly support these objectives as they are now under pressure, at a time of national crisis and danger of war where journalists are challenged to reflect the official line and rally around the flag and where politicians attempt to use such national mood to manipulate the flow of information or even silence journalists.

3. To fight to maintain trust in news media underpinned by the free flow of news, information and opinion to  keep citizens informed and help them make up their minds.

4. To commit themselves to campaign among their members to ensure that the quality of the information does not become tainted by propaganda and encourage them to identify with objective reporting.

5. To declare mutual solidarity in standing up to the pressures to conform and mobilise individual journalists to support each other to resist such pressure by promoting solidarity and a strong journalistic ethic.

6. To prioritise safety of their members by pooling their respective resources and working with the IFJ Safety department to organise safety training, trauma counselling and provide assistance with medical needs as well as protective equipment to ensure greater protection. Furthermore, the IFJ and the EFJ emphasize the need for independent investigations into violations against journalists, as stated in the International Partnership Mission to Kiev in February 2014.

7. To establish a formal coordination involving representatives from the three unions to monitor developments and implement this agreement. The IFJ and EFJ remain ready to help these member unions throughout this crisis and ensure they remain in close contact, fight for common objectives and ensure their actions to defend journalists and journalism are always embedded in principled values of solidarity.

Both Federations pledge to build on the experience of their recent mission to Kiev and call on all IFJ and EFJ member unions to show their solidarity with our Ukrainian and Russian colleagues and their unions by supporting unequivocally meetings, events, training sessions we would be organising in both countries as a way to strengthen our common objectives as journalists independent from political and commercial interests.