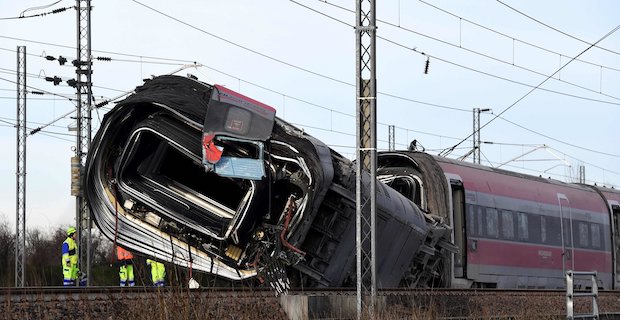 An inter-city French train traveling between Strasbourg and Paris derailed Thursday morning, the state-run SNCF rail company said. The incident occurred near Ingenheim, a commune in northeastern France, when a landslide caused the TGV high-speed train to come off the rails. At least 21 passengers suffered minor injuries in the accident. The driver, said to be seriously hurt, was evacuated via helicopter, the SNCF said. Rail traffic will not be disrupted, and only certain trains will be diverted to other lines, the statement said, adding that 300 people were onboard the train. In 2015, a TGV train derailed on the Paris-Strasbourg line during a test run, killing 11 people.

Keywords:
FranceHigh-speed Train
Your comment has been forwarded to the administrator for approval.×
Warning! Will constitute a criminal offense, illegal, threatening, offensive, insulting and swearing, derogatory, defamatory, vulgar, pornographic, indecent, personality rights, damaging or similar nature in the nature of all kinds of financial content, legal, criminal and administrative responsibility for the content of the sender member / members are belong.
Related News