Traditional trip to Greek Cypriot side comes amid tensions in region, especially over rights to energy exploration 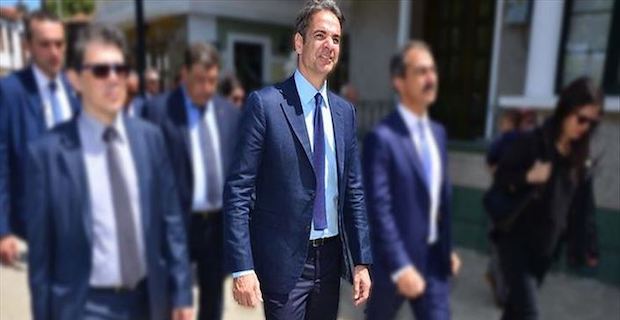 Greece’s new prime minister got a warm welcome from the Greek Cypriot administration leader on Monday at the beginning of a two-day working visit. After meeting at the presidential palace, Nicos Anastasiades said Kyriakos Mitsotakis paying his first overseas visit to the Greek Cypriot side shows their strong relations. “It shows your personal decision to continue the very close collaboration," said Anastasiades.

“This is not just a symbolic trip, it is a substantive one," said Mitsotakis, who took the Greek premiership after snap elections earlier this month. The countries “always face significant challenges in the wider region together and united," he added.  Mitsotakis called it a "great joy and honor” to make his first official trip abroad to the Greek Cypriot side, as is traditional. When Greece is strong, so is the Greek Cypriot side, the premier added.

The visit comes amid tensions with Turkey and the Turkish Republic of Northern Cyprus (TRNC) over energy exploration in the Eastern Mediterranean, with Turkey sending out two ships to seek out underwater resources. Turkey has consistently contested the Greek Cypriot administration’s unilateral drilling in the Eastern Mediterranean, asserting that the TRNC also has rights to the resources in the area.

In 1974, following a coup aiming at Cyprus’ annexation by Greece, Ankara had to intervene as a guarantor power. In 1983, the TRNC was founded.

The decades since have seen several attempts to resolve the Cyprus dispute, all ending in failure. The latest one, held with the participation of the guarantor countries -- Turkey, Greece, and the U.K. -- ended in 2017 in Switzerland.

Keywords:
Greek CypriotNicos Anastasiades
Your comment has been forwarded to the administrator for approval.×
Warning! Will constitute a criminal offense, illegal, threatening, offensive, insulting and swearing, derogatory, defamatory, vulgar, pornographic, indecent, personality rights, damaging or similar nature in the nature of all kinds of financial content, legal, criminal and administrative responsibility for the content of the sender member / members are belong.
Related News