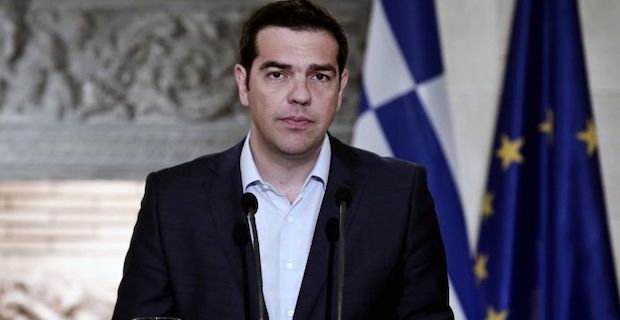 Prime Minister Alexis Tsipras managed to secure the support of 151 MPs from Greece’s 300-seat legislature late Wednesday, avoiding snap elections and clearing the way for the ratification of an agreement ending a dispute over Macedonia’s name.

Tsipras was forced to call for the vote following the resignation of his right-wing coalition partner Panos Kammenos, who is also the outgoing defense minister.

Some 299 MPs cast votes. Tsipras’ leftist party has 145 MPs, while four MPs from Kammenos' Independent Greeks (ANEL) party decided to support the government. One independent MP and one from the Potami party also voted in support.

The results follow a heated debate Tuesday between political leaders.

"I called for this debate and the process of a vote of confidence in full understanding of the historicity of the times and mainly with a complete sense of my duty toward parliament, the Greek people, and democracy," Tsipras said.

On Sunday, Kammenos, leader of hard-right ANEL party, said his party would withdraw from the government of “national unity”, which he said had successfully delivered the country from a period of IMF bailouts.

Last June, Greece and Macedonia signed the Prespes Agreement, which requires Macedonia to change its name to the Republic of North Macedonia and Greece to drop its objection to Macedonia joining the North Atlantic Treaty Organization (NATO) and becoming a member of the European Union.

Macedonia was founded in 1991 and was admitted to the UN in 1993 but was accepted under the name Former Yugoslav Republic of Macedonia due to Greece’s objection to the name Macedonia.

Many countries, including Turkey, recognize Macedonia with its present name.

Keywords:
Greece Prime MinisterAlexis Tsipras
Your comment has been forwarded to the administrator for approval.×
Warning! Will constitute a criminal offense, illegal, threatening, offensive, insulting and swearing, derogatory, defamatory, vulgar, pornographic, indecent, personality rights, damaging or similar nature in the nature of all kinds of financial content, legal, criminal and administrative responsibility for the content of the sender member / members are belong.
Related News