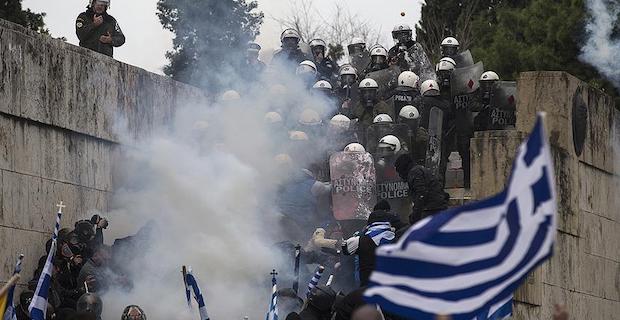 Days ahead of a parliament vote, thousands rallied in central Athens on Sunday to protest an agreement that would rename neighboring Macedonia to the Republic of North Macedonia.

Some 2,000 police officers were deployed around the Greek Parliament building and surrounding streets, while police also used drones to get a complete view of Syntagma Square. 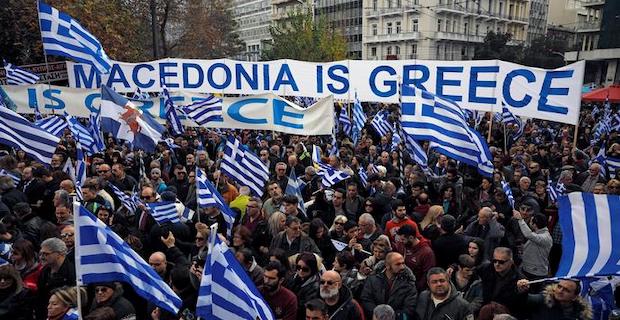 Though police estimates of attendance of around 60,000 fell below expectations, throngs of people gathered to chant slogans against the name deal while demanding the government hold a referendum on the issue.

“We stand here united,” one protestor shouted, adding: “We demand the government let our voice be heard, we want a referendum on the name deal.”

According to police sources, 326 chartered buses came to central Athens from all over Greece to protest the deal, signed last June by the leaders of Greece and Macedonia.

At least five police officers as well as some protesters were injured in incidents in front of the Greek Parliament building, while earlier a group of hooded protesters trying to storm the building were repelled by riot police using tear gas.

Parliament is set to debate the agreement this week and vote on it this Friday.

In June, the Macedonian and Greek governments signed the Prespa Agreement, which requires Macedonia to change its name and Greece to drop its objection to Macedonia joining NATO and the European Union.

Macedonia was founded in 1991 and was admitted to the UN in 1993 but was accepted under the name “the Former Yugoslav Republic of Macedonia” due to Greece’s objection to the name Macedonia, which it claims as its own.

Many countries, including Turkey, recognize Macedonia under its present name.

Keywords:
GreeceMacedonia Name Change DealMacedonia
Your comment has been forwarded to the administrator for approval.×
Warning! Will constitute a criminal offense, illegal, threatening, offensive, insulting and swearing, derogatory, defamatory, vulgar, pornographic, indecent, personality rights, damaging or similar nature in the nature of all kinds of financial content, legal, criminal and administrative responsibility for the content of the sender member / members are belong.
Related News