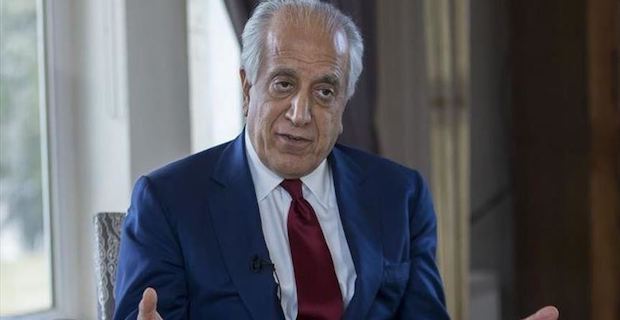 The U.S. peace envoy for Afghanistan on Tuesday thanked Germany and Qatar for agreeing to host the upcoming July 7-8 intra-Afghan Dialogue Conference. Zalmay Khalilzad, U.S. Special Representative for Afghanistan Reconciliation, said this in a series of tweets following the ongoing seventh round of talks with the Taliban in the Qatari capital, Doha.

He said this dialogue is an essential element of the four-part peace framework and an important step in advancing the peace process.

"Mutual acceptance, seeking consensus, and agreeing to resolve political differences without force is what is needed to learn from the tragedy of the last 40 years. I wish participants success,” the veteran Afghanistan-born American diplomat tweeted.

There have been mixed signals from the officials in Kabul and the Taliban over this so-called intra-Afghan conference. The insurgents are portraying it as proposed negotiations with politicians not representing the Kabul administration while officials insist this initiative is led and owned by Afghan government in close collaboration with the international partners.

After Foreign Minister Salahuddin Rabbani's recent trip to Berlin, Sebghatullah Ahmadi, spokesman for the Ministry of Foreign Affairs, said earlier this week the peace talks have entered critical stage and soon Germany would facilitate the crucial round.

However, Suhail Shaheen, spokesman for the Taliban’s Qatar office, said on Tuesday talks would not be held with the Afghan government.

In a social media post, he said talks would instead be held with the ‘Afghan sides’ after a timetable for the withdrawal of foreign troops is agreed upon during the presence of international observers.

Keywords:
AfghanistanZalmay Khalilzad
Your comment has been forwarded to the administrator for approval.×
Warning! Will constitute a criminal offense, illegal, threatening, offensive, insulting and swearing, derogatory, defamatory, vulgar, pornographic, indecent, personality rights, damaging or similar nature in the nature of all kinds of financial content, legal, criminal and administrative responsibility for the content of the sender member / members are belong.
Related News