G20 to say economy recovering, crisis not yet overcome

German proposal to tighten regulation of so-called 'shadow banking' and extending a deadline on reining in trade protectionism. 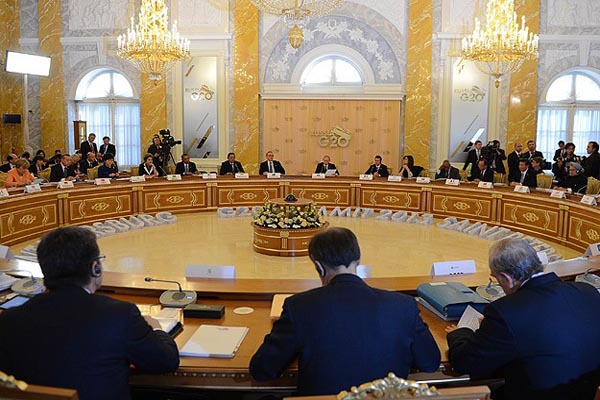 The Group of 20 will say in its summit communique that the global economy is improving but it is too early to declare an end to crisis, a Russian official involved in its drafting told Reuters on Friday. Leaders of the G20 - which groups developed and emerging economies accounting for 90 percent of the world economy and two-thirds of its population - will stick closely to the statement issued by finance ministers in July. That demanded changes to monetary policy must be "carefully calibrated and clearly communicated". New elements will refer to a growth initiative proposed by Australia, which assumes the G20 chair next year, a German proposal to tighten regulation of so-called 'shadow banking' and extending a deadline on reining in trade protectionism. "Compared to the start of the Russian presidency there has definitely been a shift in the assessment, and that is reflected in the leaders' communique," Andrei Bokarev, head of the Finance Ministry's international department, said in an interview. Emerging and developed G20 powers struggled to find common ground over the turmoil unleashed by the prospect of the United States reducing a flood of dollars to the world economy. Still, they managed to produce a "balanced" document, Bokarev said.

The G20, which united in response to global crisis in 2009, now faces a U.S. economy pushing ahead, with developing economies facing blowback from the looming 'taper' of the Federal Reserve's monetary stimulus.

Whatever form of words the G20 comes up with, for the markets it will pale in comparison to the monthly U.S. jobs report, due later, which will go a long way to dictating whether the Fed acts this month or not.

Nascent signs of a turnaround in Europe after a sovereign debt crisis and slump in parts of the euro zone kept the region's leaders out of the firing line for the first time in three years.

"I want to tell you, at this G20 we were no longer the focus of attention," said European Commission President Jose Manuel Barroso.

The summit debate on the health of the world economy, chaired by Russian President Vladimir Putin on Thursday evening, was difficult and reflected concerns about a growth slowdown in the developing world.

"The most difficult and time-consuming discussions related to the evaluation of the situation of global economy," Bokarev said on the sidelines of the two-day summit in St. Petersburg.

But the facility is a drop in the ocean compared to the trillions traded in foreign exchange daily and it is likely to be next year at the earliest before it is finalised.

China and Russia - which both run external surpluses - chided India on Thursday for failing to tackle a yawning current account deficit that has exposed the rupee to a brutal selloff amid a broader flight to the U.S. dollar.

Indian Prime Minister Manmohan Singh won some support from Japan on Friday, as the two countries said they would expand a bilateral currency swap facility to $50 billion from $15 billion, strengthening the rupee's defences.

The prospect that the Fed may rein in its expansive monetary policies as soon as this month has vexed emerging economies that had enjoyed rapid growth thanks to a flood of cheap dollars into the world economy.

"The communique of course reflects that developed economies' share in global economic growth will be larger than that of emerging markets," Bokarev said.

"The communique states that developing economies are making a big contribution to global growth, but at the same time it is obvious there is a slowing trend."