Fully vaccinated passengers returning to England, Scotland and Northern Ireland from France will no longer need to quarantine after Sunday. 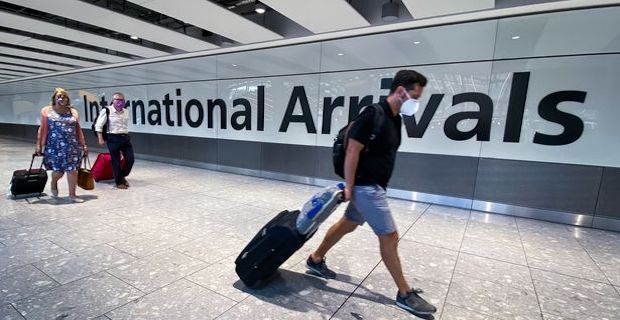 Under widespread changes to the traffic light system for travel, France is being moved from amber-plus to amber.  It was added to the list last month amid concerns about the Covid Beta variant, which scientists believe may be more resistant to vaccines. But thousands of Britons are in Mexico, which is moving to the red list. It is one of four countries now considered to be among the highest risk destinations. Despite prior speculation, Spain will remain on the amber list, enabling travellers who are fully vaccinated to continue to enjoy a quarantine-free return.

However, the Department for Transport has now said that "arrivals from Spain and all its islands are advised to use a PCR test as their pre-departure test wherever possible" instead of the cheaper lateral flow tests.

But in a series of tweets Conservative MP Huw Merriman, chairman of the Commons Transport Select Committee, criticised "expensive" PCR tests for travel as an "unnecessary rip-off" and a "barrier to affordable travel".

India, Bahrain, Qatar and the United Arab Emirates are being moved from the red list to the amber list as part of the changes, which come into effect from 04:00 BST on 8 August.

And Germany, Austria and Norway are among seven nations being added to the green list.

The total number of countries or territories on the green list - from which all travellers can return without having to quarantine - will rise from 29 to 36.

But other countries have their own rules about allowing visitors - so being on the UK's green list does not guarantee travellers can visit there.

There are no changes to the rules requiring travellers to take tests before and after their return.

Transport Secretary Grant Shapps said: "We are committed to opening up international travel safely, taking advantage of the gains we've made through our successful vaccination programme, helping connect families, friends and businesses around the world."

Asked about the advice on PCR tests for arrivals from Spain, he told BBC Radio 4's Today programme that ministers were "not asking people to do anything different from what's been happening in Spain".

He insisted the government was "not changing the rules", as in Spain's case, "virtually everyone is taking a PCR" to meet the government's performance standards for the pre-departure test - adding that PCR tests helped scientists monitor variants.

He said that between 5,000 and 6,000 British holidaymakers are in Mexico currently and would be "making arrangements to come home". They need to return by the 04:00 BST deadline on Sunday or pay for hotel quarantine.

Keywords:
FranceGreen ListCovid TravelAmber List
Your comment has been forwarded to the administrator for approval.×
Warning! Will constitute a criminal offense, illegal, threatening, offensive, insulting and swearing, derogatory, defamatory, vulgar, pornographic, indecent, personality rights, damaging or similar nature in the nature of all kinds of financial content, legal, criminal and administrative responsibility for the content of the sender member / members are belong.
Related News