Eight people have been taken to hospital, with four in a critical condition, after a suspected crush during a concert in south London. 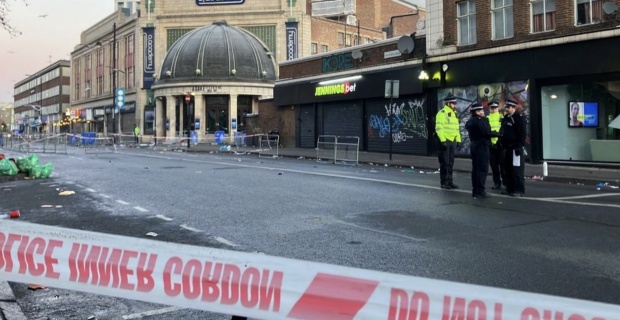 Police were called to the Brixton O2 Academy at 21:35 GMT on Thursday, during a gig by afro-pop singer Asake.  Officers were responding to reports of a large number of people trying to force their way into the venue.  A number of people were found with injuries believed to have been caused by crushing, police said.  An investigation has been launched and cordons remain in place at the venue on Stockwell Road. No arrests have been made. The gig was abandoned part-way through. It was the third of three sold-out shows the Nigerian singer, sometimes known as Mr Money, had performed in Brixton.  Social media footage shows a large crowd building up outside the venue, with one person claiming on Twitter that more than 1,000 people had turned up without tickets.

Cdr Ade Adelekan from the Metropolitan Police said the scene will be examined by specialist officers as part of an investigation which will be "as thorough and as forensic as necessary". He said: "This is an extremely upsetting incident which has left four people critically ill in hospital. My thoughts and prayers are with them and their families."

Keywords:
O2 AcademyConcertBrixton
Your comment has been forwarded to the administrator for approval.×
Warning! Will constitute a criminal offense, illegal, threatening, offensive, insulting and swearing, derogatory, defamatory, vulgar, pornographic, indecent, personality rights, damaging or similar nature in the nature of all kinds of financial content, legal, criminal and administrative responsibility for the content of the sender member / members are belong.
Related News