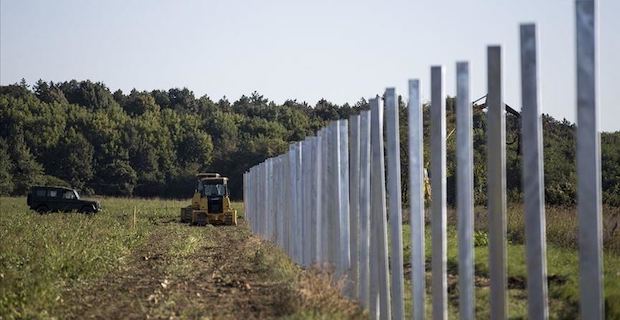 As Europe celebrates the 30th anniversary of the fall of Berlin Wall later this week, the continent has built new walls and barbed wires against migrant flows.  The new "Berlin walls" demonstrate restrictions and divisiveness have triumphed above freedom in Europe.

According to data compiled by Anadolu Agency, there are currently around 20 walls or barbed wires on the borders of European countries.

There has been a significant rise in walls and barbed wires after the 2015 refugees crisis.

The walls and barbed wires built in Europe after the fall of Berlin wall in 1989 has surpassed 1,000 kilometers (621 miles), according to the Netherlands-based Transnational Institute.

This number is six times larger than the length of the Berlin Wall, the study said.

Research said tight border controls and patrolling ships in the seas have also formed "invisible walls" against migrants and created an atmosphere of fear, inflamed xenophobia and formed a dangerous world for migrants.

More than 39,000 irregular migrants and refugees have reached Europe by sea since the beginning of 2019. As many as 840 died at sea, according to the International Organization for Migration (IOM).

Keywords:
EuropeBerlin Walls
Your comment has been forwarded to the administrator for approval.×
Warning! Will constitute a criminal offense, illegal, threatening, offensive, insulting and swearing, derogatory, defamatory, vulgar, pornographic, indecent, personality rights, damaging or similar nature in the nature of all kinds of financial content, legal, criminal and administrative responsibility for the content of the sender member / members are belong.
Related News