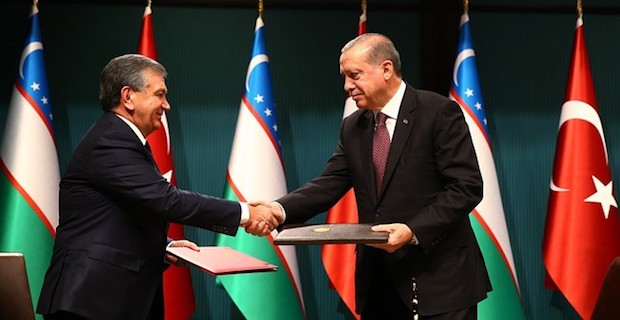 AVRUPALONDON - Turkey is working with Uzbekistan to enhance bilateral ties in all areas, President Recep Tayyip Erdogan said Monday. “We discussed all topics related to Turkey-Uzbekistan -- politics, military, economy, trade, culture, the defense industry -- and what we can do in the process after this."We found the opportunity to discuss these,” Erdogan said at a joint news conference with his Uzbek counterpart Shavkat Mirziyoyev in capital Tashkent.“We exchanged views on regional and global issues. Last year in October, we brought Turkey-Uzbekistan relations to a strategic partnership on the occasion of my distinguished brother’s visit to my country with his family.“In our meeting today, we have taken steps to strengthen the infrastructure of our strategic partnership.”The presidents signed agreements comprising 25 items, which Erdogan regarded as “a beginning of a long journey for Turkey and Uzbekistan”.The meeting of the Turkey-Uzbekistan High-Level Strategic Cooperation Council will be held annually, the first of which will be held in Turkey, Erdogan said.

The Turkish president said Turkey remains determined to boost bilateral ties “from economy to the defense industry, education to culture, environment to energy, agriculture to tourism, in all areas”.

He also “welcomed” the developments in economic relations, saying the trade volume between the two countries went up by 20 percent in the first quarter of the year.

Mirziyoyev said he was pleased their views were "the same".

He added that views to establish peace and stability in Afghanistan were also exchanged between the presidents; he also condemned international terror.

“We have long negotiated with President Erdogan. Uzbekistan flag will also be among the flags in this council.

"Uzbekistan will also attend the meeting in Bishkek, this is an important, big decision,” the Uzbek president said.

Keywords:
ErdoğanMirziyoyevUzbek
Your comment has been forwarded to the administrator for approval.×
Warning! Will constitute a criminal offense, illegal, threatening, offensive, insulting and swearing, derogatory, defamatory, vulgar, pornographic, indecent, personality rights, damaging or similar nature in the nature of all kinds of financial content, legal, criminal and administrative responsibility for the content of the sender member / members are belong.
Related News