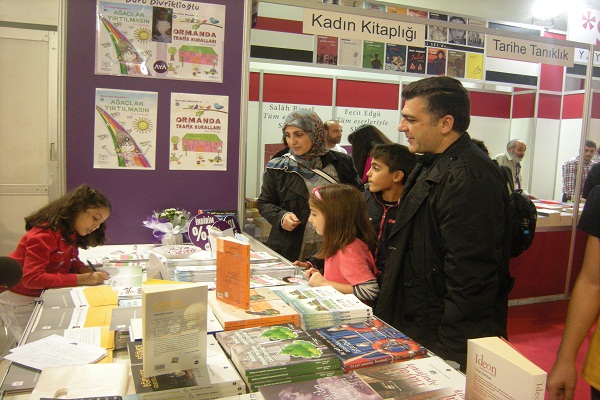 SHE WROTE A STORY AT THE AGE OF FIVE, PUBLISHED HER FIRST BOOK AT THE AGE OF 7, HELD A BOOK SIGNING EVENT AT THE BOOK FAIR WITH HER SECOND BOOK AT THE AGE OF 9! İstanbul TURKEY - Duru Divriklioğlu, the 9-year old kid writer of AYA Kitap, a publishing house that brought many writers to the world of literature, signed her books “Don’t Let the Trees Get Torn” and “Traffic Rules in the Jungle” for her readers as young as her. Duru Divriklioğlu is a 9-year-old kid writer and began writing her first story tales at the age of five. When asked: “How did you decide to write story tales while your peers just prefer to listen to them before sleep?” Duru answers: “I didn’t like much the tales I was told. Their endings weren’t always the way I wanted them. It is as if some things were missing.”

Duru won the third place in Tepe Nautilus Story Contest in 2010 with her story, “Don’t Let the Trees Get Torn”, she was the youngest contestant and her story got published in the book “Let Our World Remain Green” along with the other winners. Later on, she published her first book with six stories, named after her award winning story, at the age of seven. She got recognition as the youngest writer in Turkey all around the country after taking part in news shows, TV programs and after giving interviews to many newspapers. She was the winner of Onur Güvener Traffic Themed Story Contest on May 14, 2011. Duru Divriklioğlu’s second book from Aya Kitap holds the title, “Traffic Rules in the Jungle”. Alongside the award-winning story the book is named after, there are two more stories, award winning “Dream Necklace” and “The Importance of Bread”. Duru has received many awards for her paintings as well and she completes her story tale books with her own drawings. Duru Divriklioğlu book signing days will continue on November 24-25 in Hall 3 at 11.00-15.00.