Dozens killed in crackdown on unrest in Kazakhstan

Security forces in Kazakhstan say they have killed dozens of anti-government rioters in an operation to restore order in the main city, Almaty. 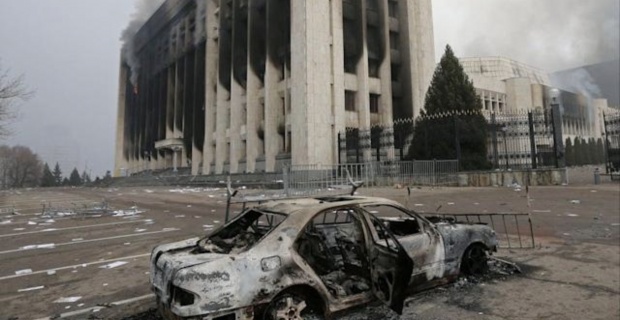 They moved in after protesters tried to take control of police stations in the city, a police spokeswoman said. Twelve members of the security forces have been killed and 353 injured in the unrest, sparked by a doubling in the cost of liquefied petroleum gas (LPG). Russia is sending in troops at the request of the Kazakh president.

They will be deployed to help "stabilise" the country, which is a member of the Collective Security Treaty Organization (CSTO) along with Russia, Belarus, Tajikistan, Kyrgyzstan and Armenia.

Protests began on Sunday when the government lifted its price cap on LPG, which many people use to fuel their cars, but the unrest has since spread to include political grievances.

Accusing foreign-trained "terrorist gangs" of being behind the trouble, President Kassym-Jomart Tokayev imposed a nationwide state of emergency that includes a curfew and a ban on mass gatherings.

President Tokayev announced he had sought help from the CSTO and the CSTO's chairman, Armenian Prime Minister Nikol Pashinyan, confirmed the alliance would send peacekeeping forces "for a limited period of time".

President Tokayev is only the second person to lead Kazakhstan since it declared independence in 1991. His election, in 2019, was condemned by the Organization for Security and Co-operation in Europe (OSCE) as showing scant respect for democratic standards.

Much of the anger on the streets, however, seems to have been aimed at his predecessor, Nursultan Nazarbayev, who has held a powerful national security role since stepping down. On Wednesday, he was fired in a bid to subdue the growing unrest and the entire government also resigned.

Protesters had been heard chanting Mr Nazarbayev's name, while a video showing people attempting to pull down a giant bronze statue of him in Taldykorgan, in his home region, was shared online.

Getting a clear picture of what is happening in the Central Asian nation is proving difficult amid what monitoring groups describe as a "nation-scale internet blackout".

Almaty police spokeswoman Saltanat Azirbek called on people in the city to stay at home temporarily as a "counter-terrorist" operation continued in three administrative buildings on Thursday.

Dozens of attackers were "eliminated" after they tried to storm police buildings in the city, she said, adding that weapons had been stolen by rioters.

About 1,000 people have reportedly been injured in the unrest, with 400 being treated in hospital and 62 in intensive care.

Protesters stormed the mayor's office in Almaty where videos on social media showed a plume of smoke rising from the building, while gunfire could be heard.

Staff at Kazakhstan's main airport had to flee anti-government demonstrators.

Water cannon were used against protesters in the western city of Aktobe. There are reports that security forces sided with protesters in some places.

Keywords:
KazakhstanAlmaty
Your comment has been forwarded to the administrator for approval.×
Warning! Will constitute a criminal offense, illegal, threatening, offensive, insulting and swearing, derogatory, defamatory, vulgar, pornographic, indecent, personality rights, damaging or similar nature in the nature of all kinds of financial content, legal, criminal and administrative responsibility for the content of the sender member / members are belong.
Related News