DOLLAR 18,59
EURO 18,20
GOLD 1.023,11
BIST 3.553,85
A £500k boost for nature in Enfield
Play time at Oakthorpe Primary School in Bowe
The Turkish National Security Council has invited all countries to recognize...
Edmonton’s fascinating history, heritage and identity is being explored...
Some mortgage deals have been withdrawn by banks and building societies
1St Qeeg Guided Rtms Tdcs Research Conference held on Oxford University
The British pound slipped to 1.1187 against the US dollar on Friday, its...
London’s Transport Commissioner Andy Byford set to leave TfL
Tax cuts are likely to push UK borrowing and debt to unsustainable levels
Karaca launches limited-edition collaboration with visionary designer...

Turkey to head to polls in parliamentary, presidential elections on June 24 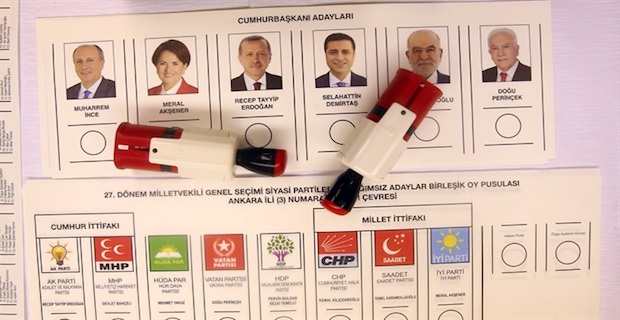 Turkish voters will go to polls for parliamentary and presidential elections on Sunday, June 24, with 56,322,632 registered voters and 180,065 ballot boxes across the country.

Voters will be able to cast their ballots after they show their ID cards or any other official identification document.

It will be forbidden to enter the voting booth with photo/video cameras and mobile phones.

Voters will cast two separate ballot papers in the same envelope -- one for the presidential and one for the parliamentary elections.

After the voting ends, ballots cast for the presidential candidates will be counted first.

For the first time, bedridden voters -- more than 17,000 -- will be visited at their homes by election officials who will pick up their ballots.

Expat votes have been brought to Turkey by airmail and they will be counted at the same time as the votes cast in Turkey on June 24.

Balloting at customs gates also began on June 7 and will continue through the election day.

Parties in the running

For the first time in Turkish history, political parties will go to elections by forming alliances.

Turkey’s ruling AK Party and the MHP have formed an alliance (People’s Alliance) while the CHP, the IYI Party, and the Felicity Party have constituted another (Nation Alliance).

A bill, submitted by the ruling AK Party and the MHP in February, stated that a political party could back another during elections.

In general elections, a political party must receive 10 percent of the votes nationwide for any of its candidates to win a seat in parliament. Now, only the alliance needs to pass the 10-percent threshold in order for the parties to claim seats in parliament.

Ballots will bear the name of the alliance juxtaposed to that of the candidates whose parties have decided to proceed with forging an alliance.

Six candidates are running for president: Recep Tayyip Erdogan for the alliance (People’s Alliance) formed by Turkey’s ruling AK Party and the MHP, Muharrem Ince for CHP, Selahattin Demirtas for HDP, Meral Aksener for the Good (IYI) Party, Temel Karamollaoglu for the Felicity (Saadet) Party, and Dogu Perincek for the Patriotic (Vatan) Party.

On the day of the elections, news media organizations will not be allowed to broadcast any political advertising, predictions or comments about the elections until 06 p.m. (1600GMT).

Keywords:
Presidential ElectionsTurkey Presidential ElectionsPresidential Election In Turkey
Your comment has been forwarded to the administrator for approval.×
Warning! Will constitute a criminal offense, illegal, threatening, offensive, insulting and swearing, derogatory, defamatory, vulgar, pornographic, indecent, personality rights, damaging or similar nature in the nature of all kinds of financial content, legal, criminal and administrative responsibility for the content of the sender member / members are belong.
Related News