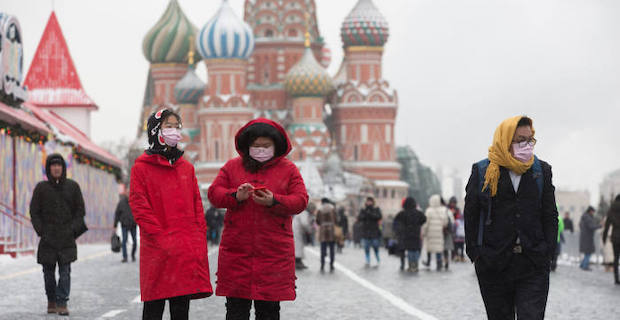 The number of the coronavirus cases in Russia rose to 840 with 182 confirmed diagnosis over the last 24 hours, authorities said Thursday. Overall, two people, both in Moscow, have died while 38 recovered, according to the latest figures on the official online portal for COVID-19 information. Moscow also takes the lead in the number of cases as more than half of all the virus patients reside in the capital. Similarly, 136 of 182 new infections were reported here.  In a separate statement, Defense Minister Sergey Shoygu said the Russian military will build 16 temporary medical facilities to combat COVID-19. He said eight centers with a capacity of 800 beds will be built by April 30 in Moscow region cities of Odintsovo and Podolsk, and in other regional centers -- Nizhny Novgorod, Volgograd, Novosibirsk, Orenburg, Ulan-Ude, and Ussuriysk.

Eight more health centers will be built by May 15, Shoygu said, without specifying their location. Measures to contain the virus in the federation include the closure of educational institutions, night clubs, and cinemas, as well as suspension of air and land traffic with several countries. While the elderly, travelers from abroad, as well as the ones showing symptoms, are already mandated to be placed in quarantine, authorities are considering punishment of up to seven years in prison for violators. COVID-19 emerged in Wuhan, China last December and has spread to at least 175 countries and territories. The number of confirmed cases worldwide has now surpassed 480,000, while the death toll is past 21,500, according to data compiled by Johns Hopkins University's Coronavirus Resource Center.