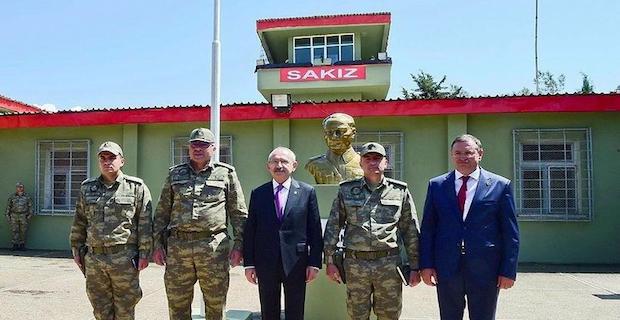 AVRUPA TIMES-CHP leader visits Turkish troops on Syrian border after a row with Erdoğan. Turkey’s main opposition leader has paid a visit to the Turkish troops on the Syrian border as the Operation Olive Branch into Afrin continues into Afrin province of the neighboring country, days after he harshly slammed President Recep Tayyip Erdoğan for visiting a military outpost along with celebrities.

CHP President Kemal Kılıçdaroğlu:“I have met with our soldiers at the Sakız Border Post. I have found them in good spirit. Our heroic army is providing security not only for Turkey but for the entire region,” Kemal Kılıçdaroğlu, head of the Rebuplican People’s Party (CHP) told reporters after his visit in Hassa province of Hatay, on the Syrian border on April 14. “The Turkish army makes its deterrence capacity well felt in the region,”Kemal Kılıçdaroğlu said.

The CHP was founded on 9 September 1923, about one and half month before the proclamation of the Republic of Turkey. The first President of modern Turkey’s oldest party was M. Kemal Atatürk. Today CHP is a social-democratic party, member of the Socialist International and associate member of the Socialist Group at the European Parliament. The scope of the CHP bureau in Brussels is not limited to the bilateral framework of Turkey's EU accession process. Issues such as the information society, energy policies, social development, climate change, international trade and security are among the different focus areas. The EU-Turkey relations are about integration and need multiple, plural and horizontal channels of communication. The CHP supports and promotes Turkey's EU membership process also by being more present and active in Brussels The CHP's Representative to the EU is Ms Kader Sevinç who previously worked as an MEP advisor at the European Parliament and in the private sector.

Keywords:
ErdoğanTroops On Syrian
Your comment has been forwarded to the administrator for approval.×
Warning! Will constitute a criminal offense, illegal, threatening, offensive, insulting and swearing, derogatory, defamatory, vulgar, pornographic, indecent, personality rights, damaging or similar nature in the nature of all kinds of financial content, legal, criminal and administrative responsibility for the content of the sender member / members are belong.
Related News