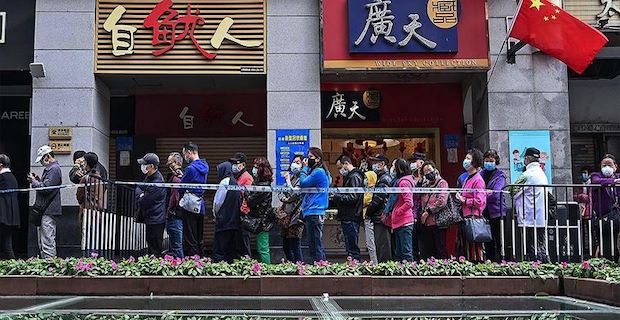 China confirmed 89 new coronavirus cases in the last 24 hours, while no additional deaths were reported in the country, according to health authorities on Tuesday. The National Health Commission of China said in a statement that all of the new cases were reported on the Chinese mainland, with 86 of them being new arrivals from overseas. China so far confirmed 82,249 cases with 3,341 deaths, while 77,738 patients recovered and were discharged from hospitals, according to the health commission.

A total of 75 people were discharged from hospitals in the last 24 hours, the statement added. A total of 1,674 people who were in contact with infected people and kept under observation were released, it added. The virus has spread to 185 countries, infecting more than 1.9 million people since first emerging in Wuhan, China late last year. The global death toll is nearly 120,000, while above 453,200 people have recovered.

Keywords:
ChinaCoronavirusCOVID-19
Your comment has been forwarded to the administrator for approval.×
Warning! Will constitute a criminal offense, illegal, threatening, offensive, insulting and swearing, derogatory, defamatory, vulgar, pornographic, indecent, personality rights, damaging or similar nature in the nature of all kinds of financial content, legal, criminal and administrative responsibility for the content of the sender member / members are belong.
Related News