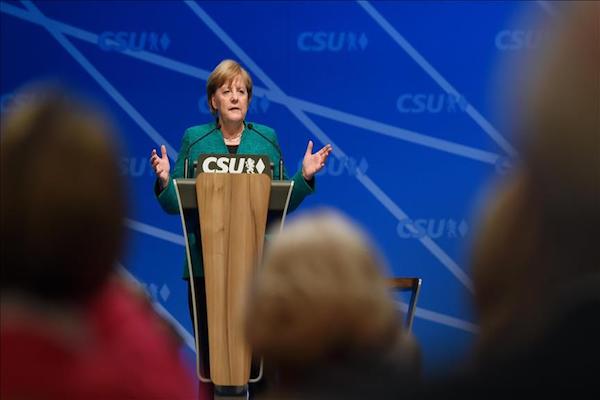 AVRUPALONDON - Leaders of Christian Democratic bloc (CDU/CSU) and Social Democratic Party (SPD) have announced on Wednesday, after their nearly seven-hour meeting at the parliament, that they have agreed on the timetable, and now they aim to conclude exploratory talks within four weeks.

“We will begin exploratory talks on January 7, 2018, and hold further talks between January 8 and 11, 2018, with the goal of reaching a result by January 12, 2018, which we can discuss at our party committees and parliamentary groups,” the parties said, in a joint statement posted on Twitter.

The Social Democrats are expected to hold an extraordinary party conference on January 21, and to decide whether or not to enter formal coalition negotiations with the Christian Democratic Union (CDU) and its sister party the Christian Social Union (CSU).

Merkel’s CDU/CSU alliance emerged as the largest bloc in the parliament Bundestag following September's federal election, but they failed to secure an absolute majority.

Coalition talks between the CDU/CSU alliance, the Free Democratic Party, and the Greens failed last month after weeks of negotiations.

SPD’s leader Schulz previously opposed a repetition of the "grand coalition" of the previous term, blaming it for his party's losses in the Sept. 24 election.

Both the SPD and CDU/CSU emerged weakened in September's poll, and many in the SPD have blamed their poor showing on the party's membership in the previous coalition.

Although Merkel's bloc is still the biggest group in parliament, it needs the support of either the SPD, which is the second largest group in the Bundestag, or two smaller parties to form a government.