Thirteen more bodies have been recovered in California, bringing the death toll in the US state's deadliest wildfire to 42, officials say. 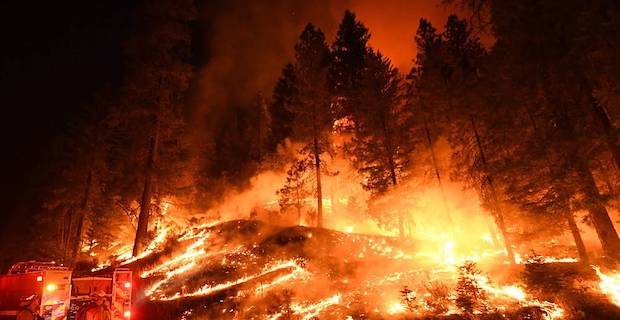 The remains were found in and around the largely incinerated town of Paradise, in the north of the state.

At least 228 people are missing as the Camp Fire continues to rage. Nearly 7,200 structures have been destroyed, and another 15,500 are at risk.

The fire has now surpassed the 1933 Griffith Park disaster that killed 31.

Speaking at a news conference on Monday evening, Butte County Sheriff Kory Honea confirmed the number of dead, and the official number of missing.

Many more people are said to be unaccounted for.

In the south of the state, other wildfires are menacing lives and property. The Woolsey Fire has so far killed two people as it damaged beach resorts, including Malibu.

More than 300,000 locals have been forced to flee their homes across California.

How did people die?

Paradise and its surrounding areas bore the brunt of the Camp Fire - the largest blaze - which started in nearby forest on Thursday.

Some bodies were found in gutted cars that were overrun by the fast-moving fire, as residents scrambled to evacuate overnight.

Sorrell Bobrink, a Paradise resident who managed to drive away with her child, told BBC World Service radio she was first woken up and alerted by a phone call from a friend.

She described the scene as "exactly like any apocalyptic movie I have ever seen" and said she did not know if she was driving towards death or out of harm's way as the sky blackened.

"I had to drive through the fire - it was awful. It was probably the most awful experience I will have in my life," she told the Newsday programme.

"It was traumatising, we will be traumatised for a long time. My whole community was traumatised - I can't watch the videos anymore because I actually went through it."Many of the victims are believed to be elderly residents or people with mobility issues who would find evacuating more difficult.

Forensic experts are stepping up their search in the ruins of Paradise, but officials warn that finding the bodies could take weeks.

Cadaver dogs are being brought in by local police to try and locate the dead, and two mobile army morgues will be used to help identify them.

What about further south?

It has consumed at least 85,500 acres and destroyed at least 177 buildings, officials said. It is only 10% contained. The smaller Hill Fire, nearby, has scorched 4,530 acres and is 75% contained.

Luxury homes in Malibu and other beach communities are among the properties destroyed.

The nearby city of Calabasas, home to well-known celebrities, remains under a mandatory evacuation order.

Why are the fires so bad?

Historically, California's "wildfire season" started in summer and ran into early autumn, but experts have warned that the risk is now year-round.

The California Public Utilities Commission is investigating what sparked the latest blazes - amid reports electrical companies may have suffered malfunctions near the sources shortly before the fires began.

The state's 40-million-strong population also helps explain the fires' deadliness. That number is almost double what it was in the 1970s, and people are living closer to at-risk forest areas.

Keywords:
California FiresCaliforniaWoolsey Fire
Your comment has been forwarded to the administrator for approval.×
Warning! Will constitute a criminal offense, illegal, threatening, offensive, insulting and swearing, derogatory, defamatory, vulgar, pornographic, indecent, personality rights, damaging or similar nature in the nature of all kinds of financial content, legal, criminal and administrative responsibility for the content of the sender member / members are belong.
Related News